"@elonmusk: Help us get out of Azovstal to a mediating country. If not you, then who? Give me a hint

Sergei Voynal is the Acting Commander of the 36th Separate Marine Brigade, which consists of around 1000 Ukrainian troops now trapped in the Avostal steel plant in the middle of Mariupol. With the exception of the 4 square miles occupied by the plant, the Russians have occupied Mariupol and the area immediately around it. The Russians have bombarded the area frequently over the last week, after allowing about 1000 civilians hiding with the troops, to exit the facility. 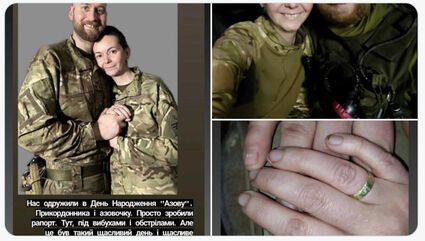 Today he joined Twitter to make an appeal to Elon Musk, for him to somehow rescue them. "@elonmusk," he tweeted. " people say you come from another planet to teach people to believe in the impossible. Our planets are next to each other, as I live where it is nearly impossible to survive. Help us get out of Azovstal to a mediating country. If not you, then who? Give me a hint."

Musk did not tweet yet in response to Voynal's plea. Musk has said he might suddenly died "mysteriously," because of how effective his Starlink internet access has been for the Ukraine military effort.

Separately, Olexander Scherba, Ukraine ambassador to Austria, tweeted: She was #AzovBattalion. He was border guard. Two defenders of Mariupol. Last week they decided to get married. This week he got killed. She is still in #Azovsteel. One of those war stories..."