After watching a vagrant defecate in front of him, the tenant prospect stated he no longer would consider Santa Monica, 'that he didn't want to be in or part of a city whose leadership allows this.' 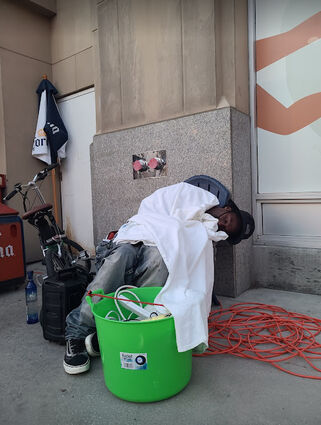 The Third Street Promenade, under the aegis of DTSM, Inc and the Safety Ambassadors, has become the de facto bedroom - and bathroom - for mentally ill and substance abusing vagrants

May 13, 2022 - The Ambassador program is a waste, and in the words of Councilmember Phil Brock, DTSM, Inc. itself must be dissolved. We need real law enforcement during the hours of 11 pm and 8 am. Private security has not worked and puts us all at physical and legal risk. The following was witnessed and photographed from this morning.

2) Ambassador passing an open dumpster room, looking in to see a guy passed out, and walking on.

3) People asleep in the elevator lobbies and stairwells of Garages 1, 2, 4 and 5 (40 yards away from Parking Manager Henry Servin's office, and allowed to remain)

7) "Pool-side sleeping with a view of the Stars" . The brown stuff shown in the water fountain area is his feces This was at the corner of Wilshire and the Promenade

8) Empty newspaper racks smashed, tagged and vandalized at Wilshire and the Promenade.

9) Trees vandalized on the Promenade, to the point several have been removed altogether

10) Vagrants and homeless charging their phones using the string of lights in the trees on the Promenade, and in the garage parking, then seen urinating and vomiting, all times of the business day

* This week one of our valued Street Maintenance workers was attacked again at 4th and Broadway. Another was hit on the head from behind. Attackers in both incidents were vagrants lying on the sidewalk 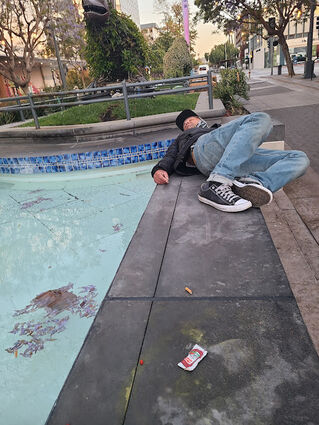 Passed out by the fountain he'd just used as his toilet

* A prominent and reputable broker from Lee & Associates was showing property in the middle of the day a few blocks away to a prospective buyer. A person stopped on the sidewalk and took a dump right in front of the group. The prospect stated he no longer would consider Santa Monica, 'that he didn't want to be in or part of a city whose leadership allows this'. He walked from the deal.

* A high-ranking city employee walked the Promenade this week for the first time in a while....His comments? "It looks like the Promenade is closed".

The $450,000 a month and free office space and new cars and trucks we are supplying to the Block-by-Block Ambassadors is a waste of Stakeholders money. That money must be reallocated to our own Santa Monica Police Department and the Sheriff's Department, who has offered its support and services.

This is not acceptable for what was once a beautiful beach-side town. Santa Monica's leadership and DTSM must be living in an inverted universe if they think this is acceptable.

Strong documentation. City Council members are in denial, living in their own make believe dream world. For everyone to else, it's an all too real nightmare.