24 Months After Completion, the Massive Block Apartments on Lincoln Blvd in Santa Monica are Empty

The awful truth is two years after completion, the Catherine Apartments stand pretty much devoid of people. 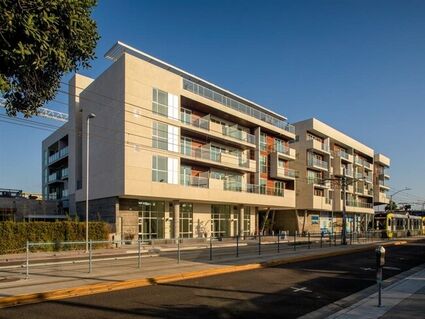 Units do feature many modern and beautiful amenities, and there is a pool in the courtyard. And you can watch trains come and go all day!

What was built on the former Norms restaurant site at Colorado and Lincoln Blvd at a cost of $40 million, is five stories tall and is pretty much devoid of people?

Convinced that renters could and would pay top dollar to live ANYWHERE in Santa Monica, developers demolished the block of buildings between Colorado and the freeway 3 years ago and began to build like mad. Pack and stack apartment buildings now cover a neighborhood where traffic is constant.

Developers completed the Catherine in 2020. Located next to the Exposition line MTA train, the building has 5 stories with 90 units.

So how come no one wants to live at 1625 Lincoln Blvd, Santa Monica 90401? Could be the high rates, which are high even by Santa Monica standards. According to the building's website http://www.catherinesantamonica.com, studio apartments start at $3000. Three bedrooms can cost you up to $7K each month.

So how many empty units are there? Evidently, lots. There are 22 units with three bedroom 2 bathrooms, starting at $6330 a month. They are 1140 square feet and above.

Two bedrooms, two baths are 860 square feet and above, and there are eighteen (18) of those available. They cost $4700 to $5700, depending on whether or not you have a view of the railroad tracks or Lincoln Blvd (yum).

This adds up to 110 units. There are only 90 units in the building. But some units are listed in overlapping categories (i.e. both as one bedroom and also as studios).

In any event the awful truth is clear. Two years after completion, the Catherine is empty. 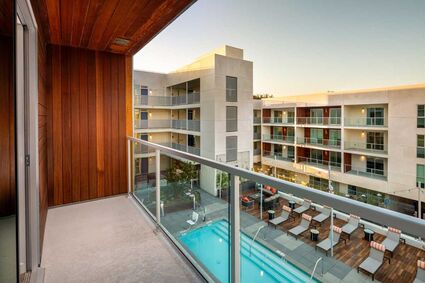 At the Catherine, units do feature many modern and beautiful amenities, and there is a pool in the courtyard.

"Catherine Santa Monica is bringing a new sophisticated living concept to downtown Santa Monica," says the building's website. "Catherine is a lifestyle solution, modern residences for career-focused, schedule-intense individuals who desire an exceptionally convenient living experience." Which means you're just four blocks from the train station, which runs right outside your windows day and night.

My conclusion: After two years, the block apartment buildings on Lincoln Blvd are a failure. Why exactly is the City of Santa Monica approving any more of them? Nothing personal against Catherine. The neighboring apartment structures, built in a rush during the last two years, are probably just as empty.

To be fair, units do feature many modern and beautiful amenities, including a really attractive swimming pool in the courtyard. And there is that view of the trains, right?

Why is it the city’s concern if this building is rented or not? Isn’t the developer the one in the line for the millions spent to build these apartments? I agree the rents seems way out of line, but if the developer would rather have a half-empty building rather than lower the rents, that’s their business decision. Or am o missing some city role in this boondoggle??

So, tear down the empty buildings and bring back Norms. Or maybe lower the rents drastically and make it an affordable building.

If a person can pay that much in rent they probably would not choose those apts first. New is nice but being by the train is NOT good. I have lived that close to city trains and it's not pleasant.

I’ve seen the units. They are sterile, synthetic, and will be tired and rundown in a few years.building these block buildings and trying to have 250 people cram their cars and bicycles into to these uninspiring nondescript buildings where maybe 10 people occupied the same footprint For part of the retail day, is sad. More traffic, noise, crime, and broken leases from people who will not be able to afford their rent…….sad.

Think the pandemic has something to do with these units being empty. The community lost Norms, a very popular, reasonably priced diner though. I remember reading the developer paid top dollar for the site. So, the rents are sky high. What’s the city’s plan to fill these apartments with renters when we have a housing shortage.