Not that being charged with a misdemeanor has any meaning currently 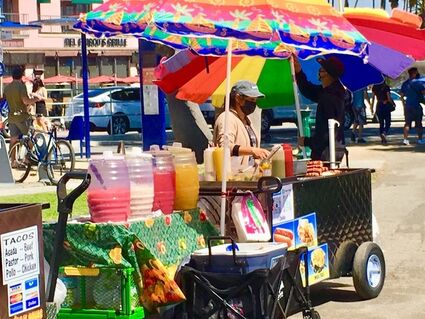 Few of the street vendors have permits from the Health Department

May 27, 2022 - California State Senator Ben Allen's law, SB 1290, which he alleges addresses regulating street vendors, such as those who've spent time crowding the Santa Monica Pier, does not adequately address unpermitted vendors, who are the ones causing the problems. Allen's proposal, already passed in the Senate, 23-4, would allow local authorities to impose fines for violations of "a local authority's sidewalk vending program" that are not based - as current law requires - on an ability-to-pay determination. Instead, administrative fines are set at $100 for the first violation, $200 for the second, $500 for the third and a rescinding o f the vendor permit for the fourth violation.

If the vendor is not permitted to begin with, such as those who swarm the pier, how can you take away their permit?

You can't. Instead, fines are greater for getting caught vending without a permit, rising to $1,000 for the third violation. But Allen's bill doesn't provide for punishment as a criminal infraction or misdemeanor. Not that being charged with a misdemeanor has any meaning currently.

To be fair to Senator Allen, it is notoriously difficult to pass law-and-order laws in a state legislature that has acted to decriminalize everything from recreational LSD to using a gun for a crime and physical assault.

In fact, even with a law as watered-down as Allen's, he has received strident criticism from fellow lawmakers. State Senator Maria Elena Durazo said that instead of enforcing fines, lawmakers should "make it easier for vulnerable street vendors" to "find the right solutions."

Durazo apparently is unaware that in Santa Monica the street vendors are run by a criminal gang and are mostly vulnerable to their overlords, not the City of Santa Monica's police department. Or we will assume as much to give her the benefit of the doubt. 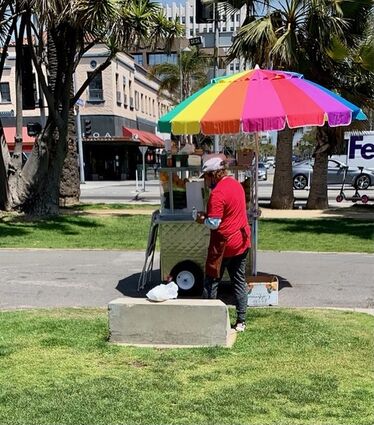 Vendors branch off into Palisades Park and the Beach and Pathways

Another law, SB 972, has passed in the State Senate that also regulates street vendors. This proposal, introduced by State Senator Gonzalez, works to encompass street vending activity under the California Retail Food Code. Gonzalez's proposed legislation would exempt street vendors from many health and construction codes that govern stationary food businesses. For example, street vendors would not be required to have access to handwashing and warewashing.

Fees for registering a "compact mobile food facility" could be reduced from those required by other food facilities by local enforcement agencies. Violations of the code could only be met with administrative fees and no criminal charges. Allen voted in favor of SB 972, expressing hope on the Senate floor that he and Gonzalez can "work out an equitable deal."

Both bills are currently waiting to be deliberated by the California State Assembly.