City Council had supported swapping parking for homeless beds, saying that it would alleviate the enormous number of homeless 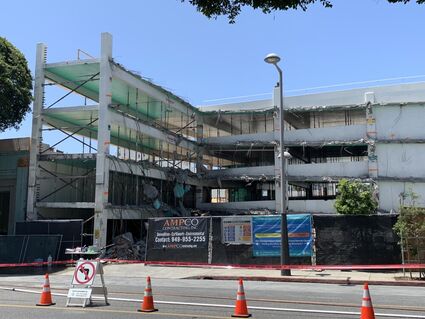 Demolition crews working for the City of Santa Monica demolished Parking Structure 3 on 4th Street this week. The plan is to construct a 200 bed homeless shelter on the location.

Local business owners had objected to replacing parking their businesses depend on for customers, with facilities serving homeless people. But Mayor Sue Himmelrich and others on the City Council had supported swapping parking for homeless beds, saying that it would alleviate the enormous number of unhoused on Santa Monica streets.

Litigation had almost prevented the demolition, but in the end, was not timely. As we reported in March:

March 18, 2022 - The City of Santa Monica prevailed against local business owners in its goal to demolish Parking Structure 3 on 4th Street downtown, but the site remains embroiled in litigation. The Santa Monica Bayside Owners Association still has a lawsuit pending against the transformation of the site from parking into supportive housing.

Originally, Superior Court Judge Michael Beckloff granted an injunction against demolition, on grounds that the California Environmental Quality Act had not been complied with by the City. The granting of the injunction implied that the judge intended to rule against the City altogether and prohibit the demolition of the garage. However, attorneys for the SMBOA were late to file a request for a hearing as required by CEQA. This ended up causing the court to dismiss SMBOA's lawsuit.

Dramatic back-and-forth ensued with injunctions against demolition getting lifted and then reinstated, with a final rejection of an Appeal Supersedeas, and the permission to demolish the garage. 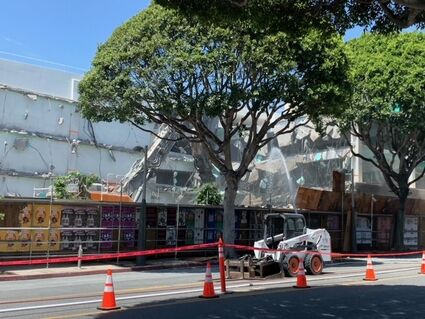 But SMBOA still has an appeal regarding the dismissal. The site could remain in litigation for years. This could affect the inclination of a lender to get involved in helping to build any housing on the site. Should the city end up losing the Appeal and underlying lawsuit, they would be liable for fees and damages to SMBOA.

Two retailers have already vacated their spaces on the Promenade citing the loss of the parking structure as the reason.

5,502 signatures were collected opposing the demolition of the garage, 96% of them Santa Monica residents. This constitutes 7.6% of registered voters in the city and 12.3% of those who voted in the last election.

City Councilmember Phil Brock stated, "The parking spaces won't matter a year from now but traffic circulation, a real dedication to cleaning up downtown by the city, and have the remaining parking garages be clean and safe is absolutely necessary."

It is unknown if Councilmember Brock has attempted to drive downtown or park there since Parking Structure 3 was closed right before the Super Bowl weekend.

The statement about “SMBOA still has an appeal regarding the dismissal. The site could remain in litigation for years.” may not be up to date. The 2nd District Division 7 appeals court dismissed the appeal on June 2nd because the demolition has been “functionally demolished”. There is no relief that can be granted and no longer any active litigation with SMBOA and the City unless they file another frivolous case.

I understand the need (?the right) of everyone to have a shelter or home, but it would be foolhardy to think that any amount of money or plan will put a dent in the poor population, among whom come our homeless people. The homeless are a multi-faceted problem, no one needs reminding. But what I see now, is the flight of businesses from downtown, to the end of which will be loss of jobs and local business taxes. To create jobs, even for the homeless, will be monumental if business owners leave.