But Venice Councilman Mike Bonin Voted Against the Proposal 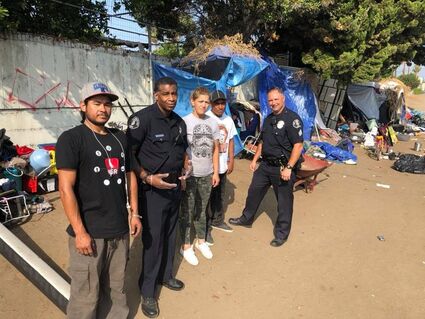 "While on patrol Officer Hendricks noticed a homeless encampment behind Stoner Elementary. A direct passage students use to and from school. Officer Hendricks and Sergeant Boen met with the homeless group, who is down on their luck. They provided the group resources to help them get back on their feet."

The Los Angeles City Council this week supported a proposal by five council members to amend the city's law against homeless encampments in certain areas of the city to extend to within 500 feet of all schools and day care facilities.

The ordinance already restricts sleeping and encampments within 500 feet of schools and day care facilities after each individual location is approved for enforcement by the City Council. On Tuesday, the council voted 13- 2 to have the city attorney draft an amendment to prohibit sitting, lying, sleeping or storing personal property within 500 feet of "any school or daycare."

The amendment will need to be approved by the City Council before going into effect.

"I've seen elementary schools with conditions that none of us as parents would find acceptable for children. Individuals with mental illness, some of them absolutely unclothed, shouting profanities in the listening ear of children," Carvalho said. He added that he was concerned about the "trauma" and "long-term, short-term repercussions (and) impact on the psychological, cognitive development of children."

Councilman Mike Bonin and Councilwoman Nithya Raman voted against the motion to amend the ordinance.

Bonin reiterated concerns he had when the council approved the ordinance last year, saying "we're spending a lot of time defining where people cannot sleep. Where can they sleep?"

Bonin and Raman also voted against approving the ordinance last summer, which modified the city's previous anti-camping law in Municipal Code 41.18 to prohibit sitting, sleeping, lying, storing personal property or otherwise obstructing the public right of way in several areas of the city. 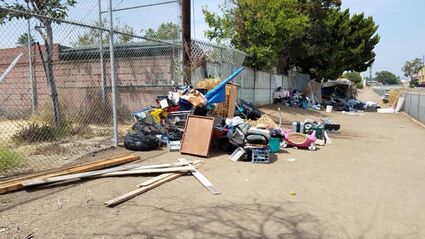 "They have now begun cleaning the area to ensure safe passages for our students. Thank you Officer Hendricks and Sergeant Boen for a job well done! " Los Angeles School Police Dept via Facebook

It also protected the public right of way within 500 feet of a "sensitive" facility (which included schools, day care facilities, parks and libraries) once the council passes a resolution to designate a specific area for enforcement, posts signage and gives notice of the date the ordinance will be enforced for the area.

The ordinance also prohibits encampments and sleeping within:

-- up to 500 feet of a designated overpass, underpass, freeway ramp, tunnel, bridge, pedestrian bridge, subway, wash or spreading ground, railroad track or where lodging unsheltered or in tents is unhealthy, unsafe and incompatible with safe passage; and

-- up to 1,000 feet of a facility opened after Jan. 1, 2018 that provides shelter, safe sleeping, safe parking or navigation centers for persons experiencing homelessness.