Zane's primary reason for supporting Himmelrich's transfer tax measure appeared to be fairness, while Verville claimed the measure is anything but fair 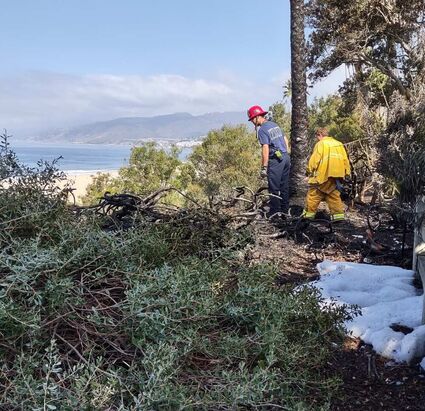 Firemen survey the aftermath of a fire in the Palisades Bluffs caused by a homeless encampment: affordable housing will not solve this problem

June 14, 2022 - In a passionate letter to the Santa Monica City Council, former Mayor and Santa Monicans for Renters' Rights co-founder Denny Zane blasted Councilmember Phil Brock's proposed tax on the transfer of property, saying it was "poison pill" designed to undermine a competing - and much higher tax - proposed by Mayor Sue Himmelrich.

The background of the debate centers around Sue Himmelrich gathering signatures to put a measure on the ballot that would raise the transfer tax on the sale of real property that is worth over $8 million from 0.6% to 5.6%, an increase of around 800%. To provide an alternative to this radical proposal, Phil Brock introduced a measure the City Council could put on the ballot that would raise the transfer tax, but only from 0.6% to 1.5%, a far more modest amount. While Himmelrich's collected funds (assuming there would be any after she has converted all of downtown's retail to affordable housing) would be managed by unelected committee members and would be earmarked 20% for schools and 80% for various homeless and low-income assistance. Brock's would presumably be managed to elected leaders who could direct the funds toward sources deemed appropriate by the electorate, including voter-expressed preferences for law enforcement, control of the homeless population, traffic, library services, and more.

Zane claimed in his letter that funding the schools is party of the city's "mission." Verville pointed out that Santa Monica schools, funded more by our city government than in most districts which rely more heavily on property taxes, are funded 29% above the state average. Rather than a funding problem, the schools have a "significant spending control problem," Verville said.

Zane contended that the city's funding of the Preserver Our Diversity program that assists very low-income individuals pay their rents "has been limited" and so more funds need to be raised through Himmelrich's tax. Many more funds. Verville countered that the city budget this year is the second highest ever. "There will be no problem maintaining, and increasing, these spends, as well as their effectiveness, with existing funding sources."

However, Zane's primary reason for supporting Himmelrich's transfer tax measure appeared to be fairness. In his mind, making the "wealthiest Santa Monica property owners and their lawyers" pay the city for creating the value of their property by the metropolis's "attractive nature" is only right. (Zane appears to believe that wealth is conferred in some arbitrary manner, like beauty or height, and is never earned through hard work.)

To Zane's argument regarding equity, Verville had his harshest criticism. Himmelrich's proposed heavy tax would in fact hit residential homeowners the hardest, Verville claimed. The Himmelrich tax does not account for inflation, and many single-family homes will soon fall under its purview. Just as bad, the tax will be evaded by the very corporate entities it is allegedly designed to target as they transfer ownership legally via shares in a partnership or corporation. In fact, this loophole "guarantees that property tax reassessments, which are also triggered by sale transfer recordings will decline," Verville explained. This will bring down revenue for the schools and city. 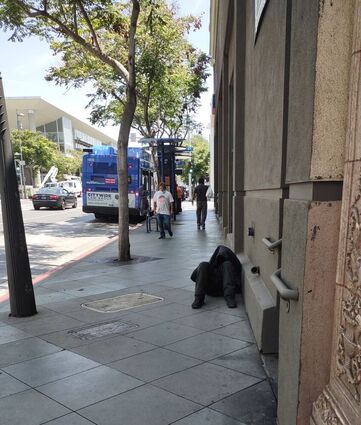 A man pleasures himself in public in downtown Santa Monica, a victim of meth addiction - the city can't say how much they have spent on homeless services

Verville said Himmelrich's tax actually excludes the highest value properties, and this exclusion was intentional, designed to forestall opposition by the city's biggest corporations. Instead, the tax targets homeowners, who are less able to mount any significant resistance.

Finally, Verville criticized Himmelrich's tax for disincentivizing the city government from revitalizing the hollowed-out, crime-ridden, plague-infested downtown area. This is "an economic engine" whose neglect is costing the city between $25 and $40 million annually.

"Ms. Himmelrich has repeatedly professed to desperately want to avoid created an economically walled off City of the very rich and everyone else. Yet that is EXACTLY what her tax proposal sets the City on course to do with the shift to direct taxation of residents, especially homeowners," Verville concluded.