Video: How Not to Do Fireworks shows family running from their own fireworks display as it destroys family SUV parked in driveway.

A video is trending on social media of a family 4th of July do it yourself fireworks display gone very wrong. In the apparent security camera video, fireworks go off underneath the family car, causing them to run away from the driveway as quickly as they can.

It is unknown what happened to the vehicle, but it appears to have been completely immolated

On social media, people are celebrating the creation of a new meme. It is being compared to the Russian army's critical failures in Ukraine.

The thirty second video may be seen on youtube at this link: https://youtu.be/USy0jHbvHQE 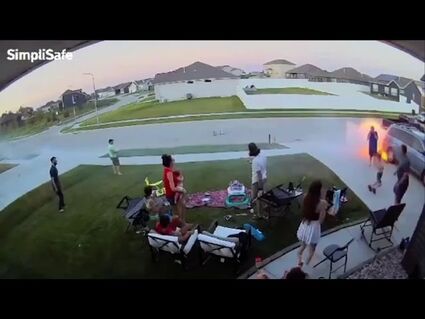 "Since SimpliSafe is trending, it's a great time to remind folks not to participate in the police state. Don't use home security cameras or video doorbells. These devices are poorly regulated, & tens of thousands of formal police requests are approved each year for these data," tweeted @KGBreeB

"If you watch enough true crime stuff, you see that crimes all over the place are solved by what cops find in these cameras. I don’t see the problem with that. If you’re out in public, you don’t have a reasonable expectation of privacy." tweeted Henry Krinkle, in reply.

"Instead of telling people not to buy surveillance cameras AT ALL, you should redirect them to safer and open source options that are hosted on your local network. Don't have to worry about tech companies or governments having your camera footage if it never leaves your home" tweeted KingofCats.