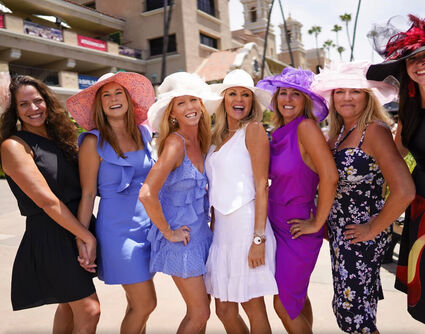 The Delmar Racetrack was first opened on July 3, 1937 when Bing Crosby and partner Pat O Brian envisioned and created a racing palace by day and a Hollywood party playground at night.

The racing legacy "Where the Turf Meets the Surf" at Del Mar Racetrack has been an attraction to many Hollywood Stars including Lucille Ball , Desi Arnaz, Mickey Rooney , Ava Gardner and many more.

In past seasons, Opening Day at Del Mar Racetrack allowed up to 47,000 or more racing fans, but the cap was not a pandemic crowd-control decree, but an attempt at making opening day less hectic and more relaxing for all attendees. This was Joe Harper's, CEO of the Del Mar Thoroughbred Club, intension for this year's opening day

Seating was available in the Grandstand, Clubhouse, Turf Club, Sky room's Luxury and Celebrity suites and the five major restaurants on the fairgrounds

The categories included the "Most Glamorous, Best Fascinator, Best Flowers, and Best Racing/All Others Theme. These fashionable attired contestants competed for more than $4,000 in cash and prizes

Steffi Poce, of Park City Utah, who competed in the Best Racing Theme category won the Grand Prize with a total value of $1800. She received a one night stay and a meal for two at Rancho Valencia Resort & Spa valued at $1000, a $500 Studio Savvy Salon gift basket, and a $300 cash

Steffi Poce wore a huge race track atop her head, with the centerpiece of a horse riding a jockey. It was very imaginative, colorful and well crafted.

The featured race was the $100,000 Oceanside Stakes, was won by Irish Bred Balnikhov. 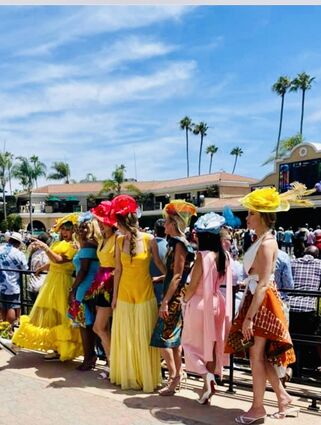 Jockey Umberto Rispoli recounted that he was all the way on the outside on the backstretch, losing to much ground, and I went down from inside. I gave my horse Balnikov a kiss on his neck and said "Let's go, we can do it". Jockey Umberto, age 33 from Italy, began to weave his way through horses and once tipped to the inside in deep stretch, he powered up the rail, rocketing to the lead winning the Oceanside Stakes! Wow what an exciting race to see!

After the 10th race was finished the happy big hatted crowd started leaving for one of many post parties including the After Pony Party at Rancho Valencia and a post-race bash at L'Auberge Del Mar hotel, 1540 Camino del Mar