Applicants must "Carry a firearm and be willing to use deadly force, if necessary." 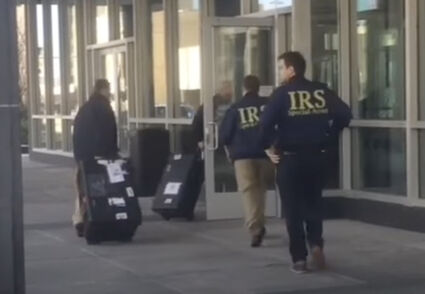 If you've always dreamt of being an IRS agent, now is the time. But you may have to use a gun to collect the taxes, apparently.

The Internal Revenue Service is advertising for new special agents, according to an ad posted to social media. Applicants should know they may be required to work "50 hours per week, which may include irregular hours, and be on-call 24/7, including holidays and weekends" and "Carry a firearm and be willing to use deadly force, if necessary." 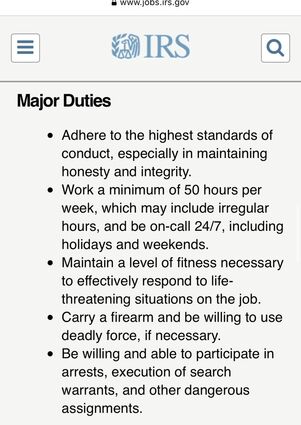 It was unclear whether the ad was connected to the Inflation Reduction Act. The Bill, past by the Senate last week and pending in the house, will hire 87,000 new special agents, about twice the size of the US Coast Guard. The obvious intention is to audit all small businesses, in order to collect more taxes and spend the money on Democrat sponsored social programs and the Green New Deal.

Studies show that ever dollar spent on the IRS results in the collection of about $5 in taxes from the American public.

The head of the Internal Revenue Service said that the tax collecting agency will "absolutely not" use $80 billion in new funding to step up audits of low- and middle-income Americans.

IRS Commissioner Charles Rettig tried to reassure the US Senate in a recent letter about the 87,000 new agents who will be hired as part of the so-called Inflation Reduction Act.

The legislation includes $45.6 billion for "enforcement-related funds", which makes up more than half of the appropriations.