But some doubted that private security could compensate for the lack of SMPD beat policemen at night. 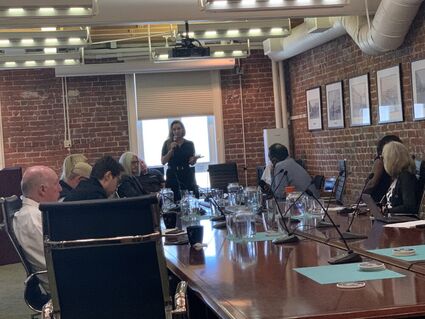 "Homelessness is not a crime" said an SMPD officer, reminding the meeting of what we all know. "So we can't remove homeless people from doorways.

The officer said that in Reed Park, various well intentioned charitable groups are bringing food to the homeless every day. This creates a magnet for homeless people from across LA, he said.

NASTEC's representative said that her company could greatly improve security on the Promenade.

John Alle, a local business owner and frequent critic of City security policies on the Promenade, doubted that NASTEC could add much to the equation. "We need more police not more security guards," Alle said. "People want the police and we should pay more to recruit more policemen. This will take time so we need help now."

City Council member Phil Brock said that he walks downtown with Oscar de la Torre regularly between 10-11pm. He said they encountered no homeless people during their walk last Monday. John Alle replied that the problems happen between 11pm and 7am

Someone suggested a solution to the hiring issues: no mandatory vaccination for SMPD candidates. "I believe 50 potential officers would offer to join the SMPD," he said. The SMPD is down about 50 officers from their authorized strength, because they are having trouble finding qualified candidates. 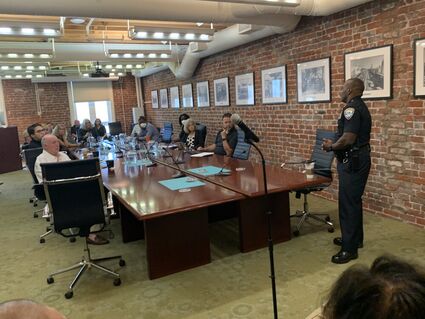 “We are a small city with big city issues,” agreed another critic of Santa Monica's security situation downtown, Arthur Jeon.

"NASTEC is one of the fastest growing and trusted international strategic security firms," says the company's website. "We pride ourselves on offering our clients the best prepared, experienced and responsive teams of security professionals found anywhere in the United States and around the world. We will work non-stop to meet and then to exceed our clients’ requirements and expectations. NASTEC has provided advice and direction to many worldwide events that required logistical, detailed preparation and communications among many groups. Our members have been credited for the professionalism and skills demonstrated at meeting the specialized demands of significant security events and venues around the world."