There were no injuries and the fire was confined to one unit. 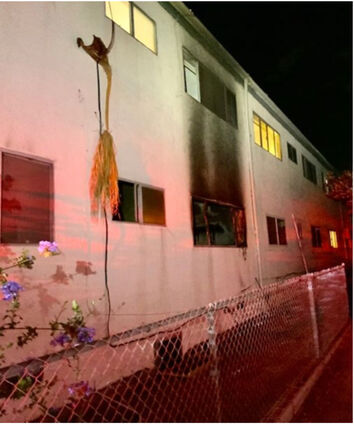 9.1.22: Multiple callers called 911 to report a structure fire in the 1400 block of 17th Street in the Mid-City neighborhood. Firefighters arrived at 9:48 pm, to find a "well-developed fire" within one apartment unit.

They "began an aggressive suppression effort and a rapid search for any potentially trapped occupants. Fortunately, all residents were able evacuate and there were no reported injuries," said SMFD Capt. Patrick Nulty in a press release.

Firefighters extinguished the blaze before it spread. Significant damage occurred to one apartment unit, wrote Nulty, "with only minor smoke damage to the unit above, forcing the displacement of two residents."

Nulty added that SMFD was assisted by Santa Monica Police, Santa Monica Building & Safety, and McCormick Ambulance. The cause of the fire is still under investigation.