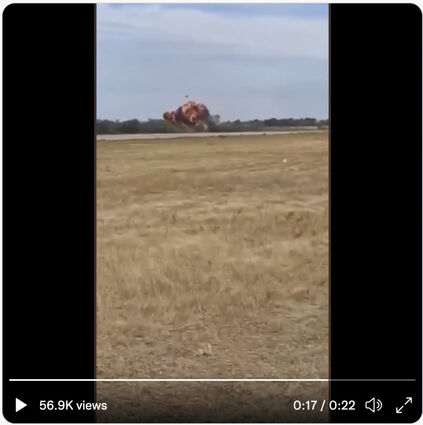 "A video has emerged of the Russian Su-25 fighter that crashed in Crimea yesterday after take-off. The plane costs around USD 11 mln. Russia also managed to shoot down its own Su-34 bomber yesterday over Crimea.Tough days for the Russian Air Force." Visegrad 24

In video posted to Twitter, Telegram and other social media, the Russian Armed Forces admit they shot down their own SU-34 multi-role fighter jet. This over Crimea on September 11th.

Russia has struggled to obtain command of the skies above Ukraine. On the other hand, they have occupied Crimea for 8 years, and it is the only part of pre-war Ukraine that would probably vote to become part of Russia. Many former Russian military people have settled there.

The shootdown comes amid nervousness and Ukraine Army advances in Northeast Ukraine's Kharkhiv Province. Video of the fiery crash may be seen at https://twitter.com/visegrad24/status/1569311601299460096?s=20&t=QTplFUZTgtOjwdB-Wlfk0g

Below is translated from : https://www.unian.ua/russianworld/rosiyani-ziznalisya-shcho-sami-zbili-sviy-zhe-vinishchuvach-nad-krimom-socmerezhi-11975571.html

Russian mil- bloggers hinted in social networks that the Russian Su-34 fighter jet fell over Crimea not by accident. This was reported by journalist Denys Kazanskyi.

On the propaganda resource Fighterbomber, the author of the publication mentioned the strange fall of the plane over the occupied peninsula on Sunday, September 11.

The plane of the occupiers fell on the border of Riznodilnenskyi and Krasnoperekopskyi districts around six in the morning on September 11. The Su-34 allegedly "landed" on the field, and the pilots managed to eject.

However, Russian resources later released a video of a large fire at the scene of the accident. Nothing more was reported about the fate of the Russian military.

They also did not specify the circumstances under which the fighter fell. It was hinted at Fighterbomber that, it seems, the Su-34 was shot down by the air defense forces of the occupiers themselves.

"I will say once again that our air defense is not a friend of our aviation. Fear it more than the air defense of the Ukrainians. They put you in charge of your territory - drop everything and maneuver on afterburners, shoot everything you have, like the last time in your life. Well, them , nah*r, dovboyob*v", - shares the author of the publication.