Was it a pipe bomb, a meth lab, or just a cooking experiment gone bad? 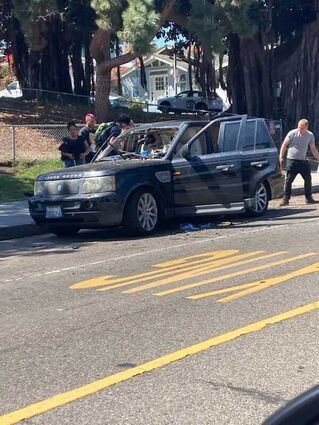 9/14/22: Several people on "Nextdoor" reported that they saw or heard an explosion that blew out the windows of a Range Rover parked near the Westminster dog park. While some said it was a car bomb, others speculated that it was a meth lab. Still others thought one homeless person living in a car in Venice, retaliated against another by bombing his car.

"I was looking for this on cit app and here. We heard the boom around 2ish, but did not know at the time what it was." posted Jay Reitzfeld.

"The couple was living in the Range Rover, and alleged that they were cooking food - possible but more likely meth - meth affects all incomes, all types" posted Em. R.

"You all are jumping on the possibility of drug cooking," posted RT. "it’s more likely another person bombed there live-in vehicle for retaliation. Multiple tents have been lit on fire right there - this also isn’t the first car to get beat up right there. - the folks that sleep on the main st side of the dog park fight constantly and the bus stops attract a rough crowd to hang out. There was no fire from this explosion so the idea of it being a meth cooking fire is pretty low. There are lots of flammable materials when cooking meth. "

"Let’s not forget about the gangster who was shooting a sub machine gun in his car and ended up shooting himself on the other side of the park. Or the overdoses on the Westminster behind the laundry service. Or the gangsters who had a shoot out 3 years ago at Westminster and Pacific. Organized crime exists and it uses that open space in Venice. This area is rough - and has been for years," said RT.

The explosion occurred Thursday afternoon in Venice. We have reached out to the LAPD for comment.