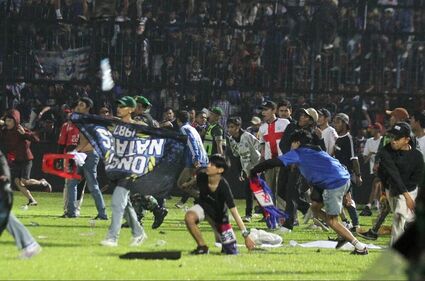 The death toll in Saturday's soccer riot in East Java has been revised down to 125, Indonesian police said. About 300 are still in area hospitals with injuries, authorities said. These are confirmed deaths; the actual death toll is said to be over 180.

When a team called Persebaya Surabaya defeated Arema for the first time in 23 years, disappointed Arema fans rushed the field. Police fired tear gas, causing a panic and a stampede.

"Supporters of Arema FC and rival Persebaya Surabaya clashed after the former's defeat, prompting the riot police to fire tear gas, according to East Java Police Chief Nico Afinta. President Joko Widodo has ordered that all matches in Indonesia's top league must be stopped until an investigation has been carried out", said the Associated Press.

The riot happened when the supporters of Arema football club stormed the pitch in protest of the first home defeat by a rival club in 23 years, said a local news source.

"Police are culpable for this massacre. They fired rubber bullets and tear gas indiscriminately into Arema FC fans who were protesting match fixing, causing mass panic," said one Indonesian fan who was at the event.

"The football world is in a state of shock following the tragic incidents that have taken place in Indonesia at the end of the match between Arema FC and Persebaya Surabaya at the Kanjuruhan Stadium." - FIFA President Gianni Infantino.

Wikipedia: "The deadliest case in the Super East Java Derby history occurred in Kanjuruhan Stadium on 1 October 2022, when Persebaya won Arema 3–2 at the end of the match. Approximately 3,000 Arema supporters invaded the pitch and wreaked havoc along their way, causing Persebaya's players to hide inside police armored personal carriers before they could leave the stadium.[6] Indonesian police tackled the situation using tear gas in order to dispersed the supporters, but the situation worsened when tear gas being trapped in wind conditions, asphyxiating Arema supporters invading the pitch." 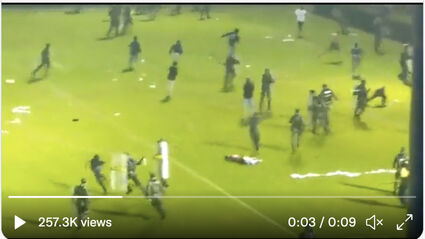 "According to official police accounts, the tear gas caused the Arema supporters to rush for the single exit point, resulting in a stampede and further asphxiations along the way.

"The disaster caused 182 fatalities, while confirmed fatalities are 125 Arema supporters and 2 Indonesian police officers. Approximately 180 others are injured from the disaster.

"As a result of this disaster, all Liga 1 matches were suspended for a week, and the Football Association of Indonesia banned Arema for hosting home matches until the end of the season. Indonesian president Joko Widodo instructed the association to suspend all Liga 1 matches until "evaluation of improvement of security procedures" is carried out."