.Outgoing Santa Monica mayor calls president Biden a "Mensch" as she poses with him on Facebook 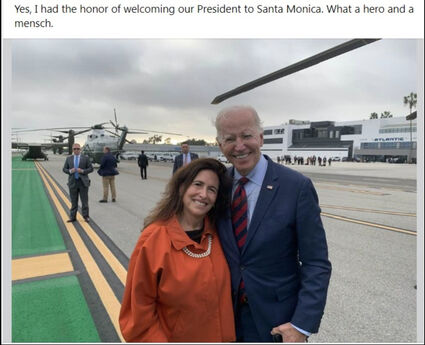 US President Joe Biden passed through the Santa Monica Airport on Wednesday. He was only in town for a half hour, as Marine One ferried him from LAX.

"Yes, I had the honor of welcoming our President to Santa Monica. What a hero and a mensch," Himmelrich posted on her Facebook page. Mensch is Yiddish for a really good guy.

There were the usual traffic tie-ups on the Westside when a Democratic president passes through on the way to local fundraisers. Biden met with adoring fans in Brentwood and Orange County; adoring enough to cough up $2000 a plate to attend a fund raiser, anyway.

Himmelrich is not running for re-election. Her term ends in December. Mayor is a largely ceremonial post, elected by the 7 City councilmembers in Santa Monica.

Wonder if he sniffed her hair like he usually does??? She might be a little old for him though...