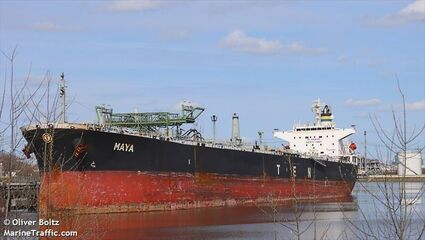 B Luminosa, one of five oil tankers that lost their flag after US Sanctions for facilitating oil trade with Hezbollah and Iran

China's fishing activities from January to May 31, 2022, near the exclusive economic zones of Ecuador, Peru, and Argentina, were four times greater than those of all other countries combined that fish in the same areas, an investigative report from The New York Times indicated. In contrast, in all of 2021, the Chinese fishing fleet spent an equal amount of time, nearly 400,000 hours, fishing in the same regions....Read more >>

Under the slogan of "a plurinational, anti-imperialist and anti-capitalist America", the Bolivian coca grower leader Evo Morales established in Buenos Aires, the Constitutive Assembly of "Runasur". According to the note published by TeleSur, "the event was attended by delegates from Argentina, Bolivia, Brazil, Chile, Ecuador, Guatemala, Mexico, Nicaragua, Panama, Paraguay, Peru, Uruguay and Venezuela."...Read more >>

On August 25, 2000, then-candidate George W. Bush gave a speech in which he framed his prospective foreign policy for Latin America. "Our future cannot be separated from the future of Latin America," Bush said. "Should I become the president, I will look south not as an afterthought, but as a fundamental commitment."...Read more >>

In total, Franklin Templeton's stake, which once exceeded $5 billion, has shrunk to about $250 million, not including sales made in October or November, according to data compiled by Bloomberg....Read more >>

Why Are Murders Spreading Across Argentina's Most Violent City?

The city of Rosario, Argentina, is on track to beat its homicide record set a decade ago, demonstrating the changed criminal dynamics of the country's most violent metropolis. A double homicide on November 4 brought the number of murders in Rosario to 250 so far this year, meaning 2022 is already the city's third-most violent year on record and has gone beyond the 241 murders registered during all of 2021....Read more >>

Chinese President Xi Jinping said Tuesday that his country will deepen cooperation with Argentina in areas including agriculture, energy, infrastructure and aviation after his bilateral meeting with President Alberto Fernández at the G20 summit....Read more >>

In the north of La Paz, Bolivia, dozens of Chinese companies operate 24 hours a day, 365 days a year, to extract gold. On paper these do not exist, as they are hidden behind mining cooperatives that receive rent in exchange for keeping the secret....Read more >>

HRW condemns the violence against journalists in Santa Cruz: "They cannot go unpunished"

César Muñoz, the researcher for Latin America at Human Rights Watch (HRW), condemned this Friday the violence against press workers during the coverage of the conflicts in Santa Cruz. The human rights expert demanded that the authorities guarantee journalistic work and investigate the facts....Read more >>

Rómulo Calvo Bravo, civic leader who commands the Santa Cruz strike: "I am one more political prisoner of Luis Arce"

The surgeon doctor leads from his house arrest the longest protest in the history of the Bolivian region. The new Santa Cruz mobilization celebrates 23 days calling on the Government to carry out the National Population and Housing Census in 2023 and not in March 2024....Read more >>

After having sent hordes of coca growers and angry police against Santa Cruz, the Luis Arce government is threatening to arrest civic leaders, who have now decided to review the region's future relationship with the Bolivian state....Read more >>

Experts identify at least five actions by Evo Morales and the MAS that led to the political crisis of 2019 and the assumption of Jeanine Añez to the presidency of the country. "F21 marks a turning point in the country's democracy, because Morales is unaware a referendum he called. He does not know the will of the people and that the population had left him the message that he should not continue in the Government, "said analyst Gregorio Lanza....Read more >>

They identify some Daniel Ortega intelligence operators in Costa Rica

After the articles that have been sent to the editorial office of the newsletter A Fondo with Roberto Samcam, we have been able, through collaborators who are in Costa Rica, to have access to photos of several of the Nicaraguan Intelligence operators who are operating in that country. ....Read more >>

The helplessness of the nations of Cuba, Venezuela, Bolivia and Nicaragua and the shameful democratic silence

The free press, international, as well as specialized organizations, prove that in Cuba, Venezuela, Bolivia, and Nicaragua there are hundreds of political prisoners, there is torture and State-terrorism as a form of government with the institutionalized violation of human rights, manipulation of so-called justice systems and that these nations in defiant yet peaceful civil resistance advocating for their freedom are now in a situation of helplessness. We are talking about entire nations who -either through force or violence- are being unduly restrained from exercising their rights right before and in plain sight of democratic leaders and governments who remain shamefully silent....Read more >>

There are legends bought by the media and "progressives" of the planet, which affirm that Bolivia is an indigenous country, whose leader is a good Indian, Evo Morales, and is located in the South American highlands. The truth is that indigenous people make up less than 20% of the Bolivian population, that the mestizo Morales is an ambitious and authoritarian caudillo, and that the altiplano occupies barely 30% of the territory....Read more >>

Santiago Morales: the man who came back from hell

More than 60 years have passed and there are still more than a thousand prisoners of conscience. They have all been in the political prisons of the Castros. Some, a few months – as is my case, because I escaped at 17 –, and many others, up to 10, 20 or 30 years in subhuman conditions...Read more >>

Nicaraguan journalists are increasingly choosing to silence attacks on press freedom to avoid being victims of new attacks by police forces or sympathizers of the Daniel Ortega regime, warned the regional network Voces del Sur in a report released this Thursday. ....Read more >>

Most of the tankers are in Venezuelan waters, where they are being used by state-run oil firm PDVSA to move oil and fuel between domestic ports, according to internal company documents seen by Reuters....Read more >>