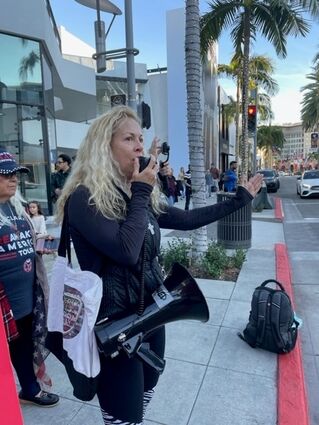 12.4.22: About 15 protesters held signs in front of the Balenciaga Store on Rodeo Drive in Beverly Hills Saturday. The signs protested an advertising campaign last month that appeared to feature images of child bondage and pornography. The protest lasted about 3 hours

"It's hard to communicate with each other as we are mostly banned from Twitter, Facebook and all the usual suspects," said one protestor. She was referring to big tech.

One protestor said that she reported to police that her ex husband sexually assaulted their daughter. She said that in court, a judge later awarded custody to the father anyway. The mother claims that happens 87% of the time under similar circumstances. Her appeal will soon be heard by the Cal. Supreme Court.

One protestor held a flag saying "don't tread on me," wearing a T-Shirt that says "Alex Jones Info Wars." Jones has been claiming for years that the Democratic party is run by pedophiles. Jones filed for personal bankruptcy this week, after a large judgment against him over claims the Sandy Hook Elementary School shooting didn't happen. Jones has since publicly retracted those claims. 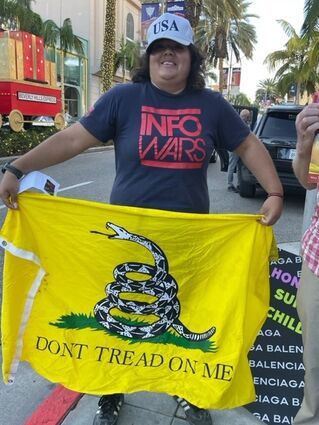 A protestor holds a flag saying "don't tread on me," wearing a T-Shirt that says "Alex Jones Info Wars." Jones has been claiming for years that the Democratic party is run by pedophiles.

Balenciaga later apologized after heavy criticism and removed all posts connected to the photo campaign. Meanwhile, the photographer, Gabriele Galimberti, said that both the children and the objects which appeared in the photos were all selected by Balenciaga, says Wikipedia. https://en.wikipedia.org/wiki/Balenciaga#Child_advertising_controversy

Hours later, Balenciaga apologized for a separate, earlier advertisement, in which a $3,000 Balenciaga handbag sits amongst papers which include the text from a Supreme Court opinion in the Ashcroft v. Free Speech Coalition. That opinion held that child pornography was ordinarily protected speech under the First Amendment.

Balenciaga announced that it was taking legal action against the production company North Six and set designer Nicholas Des Jardins, responsible for the advertisement with the child pornography court document, for $25 million. In response, the set designer's attorney said that Balenciaga representatives were present at the shoot, and handled the papers and props used, says Wikipedia.

Balenciaga dismissed their lawsuit against the photographer on December 2, 2022.

This article states: That opinion (Ashcroft) held that child pornography was ordinarily protected speech under the First Amendment. Child pornography is not protected by the First Amendment, and a crime under obscenity law (Miller v. California). Distributing child pornography is also banned and a crime (New York v. Ferber), as is the possession of it (Osborne v. Ohio). The Ashcroft decision is a controversial and complicated one that basically said images of children in these situations, whether drawn, painted or computer-generated, are not subject to existing laws because no children were harmed in the production of them. That's highly debatable and seems like playing semantics. Any depiction of children in those situations, real or illustrated, should be illegal because the effect of them on the viewer is the same. Even so, the Ashcroft decision is a long way from saying child pornography was ordinarily protected under the First Amendment. It surely is not.