Last Weekend To See Why Theater Goers Are Raving About 'Endgame'. Playing At The Santa Monica Playhouse Through Sat Dec 17th 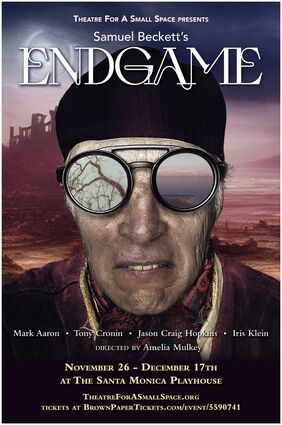 The not to be missed play opened at the end of November at the Santa Monica Playhouse to rave reviews and rapturous applause! There are only three nights left to see for yourselves Thurs-Sat 17th December before the must-see production closes after it's successful run.

or on Brown Paper Tickets.

Endgame tells the story of a man, blind, crippled, unable to move and his servant struggle to fill the moments of the day, sensing the end is near, yet hesitating to face it while the world outside is lifeless and destroyed. Endgame is a theatrical masterpiece: poignant, poetic, beautiful, brilliantly funny and horrifying at the same time. Endgame is an ode to the world wide destruction wrought in the 20th century by war mongering regimes, war that left much of the world in rubble. A perfect play for the world's current state of affairs: a degrading environment, war and threats of war, angry and dispossessed populations, self-important and disinterested elites.

Endgame is a play for our time and an exhilarating night out that delivers a memorable experience without breaking the bank!

Theater For A Small Space: Is a registered non-profit arts organization based in and produces plays in Santa Monica California.

They have been producing the plays of William Shakespeare under the name Colonials: An American Shakespeare Company at the Miles Memorial Playhouse in Santa Monica for six seasons. The company philosophy is to present the plays as written and to allow them to speak for themselves. While they are not an "originalist" company they do not try to recreate the plays as produced when they were first written – they strive to be true to the words in the script, the integrity of the blank verse, and the stories as Shakespeare crafted them.

Before each performance they tell the audience to turn off their cellphones and get ready for an interactive experience:they, the actors, speak, and you, the audience, listen. This is how the plays have been expressed for over 400 years – it is a very different experience than watching a program on TV or a film in the movie theater.

In addition to Shakespeare's plays, Theatre for a Small Space has produced several new pieces, including A Light in the Shadows, Excuse for a Swordfight, and Spirit of the Dane. This season they are thrilled to be producing Samuel Beckett's masterpiece Endgame.