He decided to stand on one foot---on that narrow ledge, some 60 feet above street level 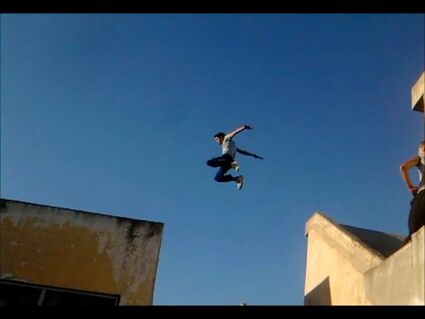 On New Years Night, I was near the end of a downtown walk. While approaching the McDonalds on Colorado, I heard something of a commotion. A packed-together crowd all had their cell phones out, looking in the same direction, up at the southwest corner of the parking garage across from McDonalds.

When I looked up, I saw what was attracting all the attention: a bare-chested white man, muscular, with black sweat pants. He was standing on the railing at the roof, very close to the surveillance camera. When just standing there didn't get him the attention he craved, he decided to stand on one foot---on that narrow ledge, some 60 feet above street level. Some in the crowd, filming it all, seemingly secretly wanted to see him fall--as long as the video of it was safely captured in their phones.

Later, when I was headed back to the Broadway garage to catch my ride, I spotted him again as he ran past me. Not bad-looking at all, about six feet tall, and ripped. Almost involuntarily, I pushed him firmly in the arm as he zipped by me, asking him, "What the HELL do you think you're doing?" He stopped his sprint momentarily, glared at me, said, "I own this town," and then stated threateningly "you're a dead man" and "watch your back," while making the universally understood horizontal back-and-forth motion over the throat. He seemed to want to take me on physically. I said to him a couple of times over, "You touch me, and you're going to jail, a-hole" (not that I believed that that could/would actually happen, in Santa Monica). Thinking the better of taking on a silver-haired 66 year old, 155 pound guy, the optics not good, he sprinted on to the facade of parking garage 7, leaping onto a low awning, and from there, climbed Spiderman style, free style, straight up the facade in mere seconds as if it were El Capitan in Yosemite. Once at the very top, he once again did his attention-getting one-foot trick, on the narrow ledge, before disappearing again. About three minutes later, he emerged, ran across Broadway, and was last seen heading north on the Promenade.

Not having a phone with me, I spotted a pair of SM refuse/trash removal guys and asked them if they could call the police on him, which they declined to do. One of those two guys said the climber is known as "Spiderman" and that he had been seen to do this before.

When I got home, at 6:30, I called the SM Police non-emergency number, asking politely, at first, if they had been getting calls about a guy climbing the facade of the parking garage, standing on one foot, etc.

My experience with the operator who answered could be described as "only in Santa Monica." It became quickly clear, that she and the police department were familiar enough with this clown such that he had earned an affectionate name from them: "Parkour Guy." I was not familiar with the term, calling him a "Spiderman", as the refuse guy had called him. The operator, who reluctantly told me her name was Anna, made some comment to the effect that calling him Spiderman was not quite cool; admiringly, she said that he DOESN'T fall; and that they're all familiar with him. When I asked why the cops don't arrest this guy or have a good talk with him, she answered they're not going to risk their lives chasing a guy on ledges. Anna's entire attitude was one of admiration for, and tolerance of, this entertaining behavior, BECAUSE HE DOESN'T FALL. It's just America's Got Talent. Really, Anna! And what if he DID fall on the wet railings from five stories up? A **SPLAT** on the pavement, in front of lots of out of town guests, and even children, who would likely remember this event for the rest of their lives. Or, worse, he could have fallen on top of someone minding their business on the sidewalk. The potential legal liability to the city were an innocent bystander to get injured or killed would be immense, especially since this performer's act was well known to the city, which did not put a stop to it. Most certainly a regional, national, and international story.

2020 car crash into the McDonald's from parking garage

But there was no reasoning with this admiring "Anna", who literally spelled out for me "Parkour" so that I could bone up on this wonderful new, hip, hyper-cool sport. "Anna" and any other government official in Santa Monica, from the Police Chief on down, who sanctions/tolerates this kind of behavior should spend the first week of 2023 looking for a new job. This incident is a distilled version of how twisted and sick Santa Monica is, how its leaders have failed it. Indeed, as the new banner states, Santa Monica is not safe; crime, depravity; outdoor mental asylum. The Santa Monica Coalition really nailed it.

UPDATE: Police Chief Ramon Batista and Lindsay Call of SM Emergency Management/Chief Resilience Officer did promptly reach out to Mr. Berg after his email blast to major figures in city government, and they agreed that the behavior of this individual certainly warranted a 911 call/response, and that the dispatcher involved will receive renewed training.

Mr. Berg should have better described the circumstances to the dispatcher as this is clearly disturbing the peace for the threatening behavior call not disorderly conduct on the parking structure. Also unclear was whether he afraid of his own safety or the parkour’s.