Police make arrest in yet another crime in Downtown Santa Monica 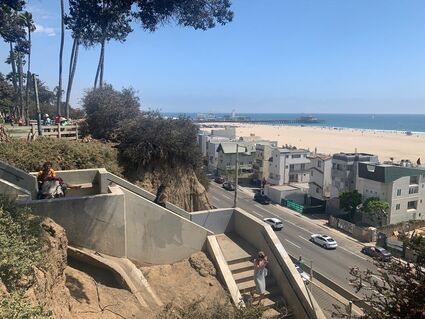 A female Santa Monica resident was sexually assaulted by a male while walking back from the beach in the afternoon of January 10.

The victim was walking up the steps from the Arizona Avenue bridge over PCH, toward Palisades Park when a young male reached between her legs from behind and slid his hand over her crotch.

The victim immediately called Santa Monica police. The officers arrived within ten minutes, arrested the man, and offered to the woman a referral guide for victims of sexual assault. The perpetrator may have been under the influence of drugs or alcohol.

It is not yet known if the case will be handled by the Santa Monica City Attorney's Office or the Los Angeles County District Attorney.

Update, 1.12.23: From Lt. Rudy Flores, SMPD PIO: On January 10, 2023 at about 3:55 PM, SMPD Officers were dispatched to the 1200 block of Palisades Park regarding a sexual assault that just occurred. Officers arrived and made contact with the victim that pointed out the suspect, who was sitting by the Arizona stairs. The suspect, Jason Corona , a 28-year-old male from Bell, was arrested for Sexual Assault. Officers discovered Corona was on probation (Post Release Community Supervision - PRCS) for assault. He was subsequently booked at the SMPD jail for Sexual Battery and PRCS violation - 3455(a) PC.

This is exactly what the mayor and city council want because everything they do encourages more vagrants to come to Santa Monica and discourage the police from doing their jobs....