'The best punk band to come out of LA in decades!' - Playing the Teragram Ballroom

Will Uribe, Dutch Faro & Chase Hansen are The Dumb Fucks 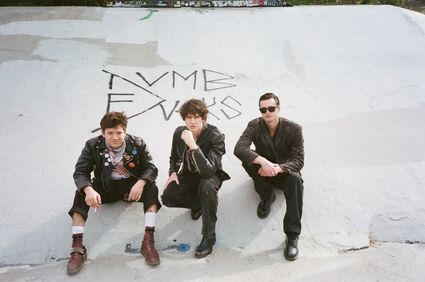 If you haven’t heard of them, then you must be a DF! Well that’s what their dedicated fans think! I think it would be fair to say the band feel the same way too!

The Dumb Fucks are widely recognized as one of the most exciting riotous punk bands to come out of Los Angeles in decades and they are set to return to play what will be a sold out gig on Friday 13th at the Teragram Ballroom.

Formed in 2015 by Dutch Faro and Will Uribe, the duo shared a similar raucous attitude in their youth that saw them both politely asked to leave school! (Kicked out)!

Without further ado, naturally they happily complied. They had music on their mind and wanted to mind their music!

Growing up listening to bands like Crass, Germs and the Sex Pistols, they were determined to make a lot of noise and cause a stir. They needed one last addition and they found that in manically talented Santa Monica raised drummer Chase Hansen. The trio was now complete. They have since grown into a powerful punk force in the Los Angeles music scene and quickly earned a large loyal following in a very short time. They regularly sell out venues such as The Echo, The Observatory, Zebulon, Constellation Room and many huge underground warehouses. Their loyal crowd is young, full of energy and some of their most devoted fans have the iconic DF logo permanently inked on their skin. A rule of thumb, showing your DF tattoo gets you a free T-Shirt at the merchandise stand.

“So, what happens when passionate and devoted fans meet the head-spinning explosive energy of the band on stage? A concert you won’t forget any time soon. They are loud. They are fast. Be warned, you are not prepared for Dumb Fucks.” Said manager Sean Prendergast.

Known for their tracks "Jesus Died for You Not Me" and "ACAB," the band will return to the stage with featured acts G*U*N*N*, Shock Therapy and Brass Neck.

This will be the band's first show in over two years, guaranteed to be a raw, powerful performance.

Their songs: The trio write songs together with Will writing guitar parts, Dutch is the powerful lead singer and also pens the lyrics for a majority of their songs. Chase writes the drum parts for their new songs. (Anaiah Lei from The Bots was the drummer on their first album.) Chase also wrote the guitar riff for their 2018 hit single ACAB which is a proven fan favorite at all the shows.

Their Influences: The fun energetic trio are all influenced and love hard core punk but have a wide range of influences. They all love the Cramps, Chase in particular. Dutch loves all genres of music, especially old blues. Will is the hardcore punk devotee and aficionado.

Their most obvious quality they share in common is they do not give a single fuck. They have an attitude and they have a large presence in any room they enter. Although they have grown up from their teenage days of causing trouble and getting banned from venues, they still carry the same rebellious boisterous enthusiasm in their music. They were even banned from the Echo/Exhoplex for two years but they made amends, returned to the Echo and sold it out in July 2021,which was their last show before taking a hiatus.

The band have had several members that have come and gone over the years but Chase, Will and Dutch are foundation of the Dumb Fucks. With a reputation for being wild, energetic, hilarious and literally not giving a fuck- did I mention they don’t give a fuck?

Do not miss this show! Oh and you have a couple of days to get the tattoo to snag that free tee shirt!

Tickets on sale now! All ages welcome. $16 Advance $20 Day of Show. Tickets available at the Teragram Ballroom website https://teragramballroom.com or by phone at (213) 689-9019.