China's Population Declined in 2022, Possibly Beginning an Era of Decline for the People's Republic

India's population will surpass China's by the end of 2023. What does this imply for the two Asian giants? 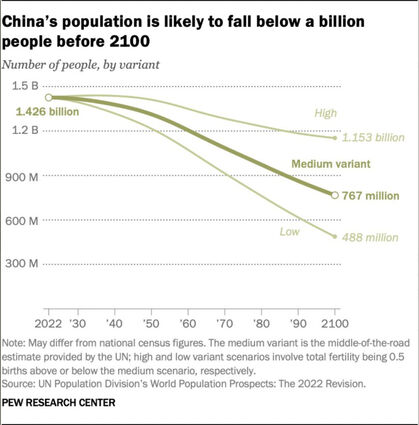 Chinese demographics based on the latest UN Population Division's World Population Prospects (the 2022 revision). Starting with their three projections for China's 2100 population based on the low, medium and high variants:

China today made an announcement long expected but still almost unbelievable: For the first time in 6 decades, the PRC's population declined in 2022. By the end of 2022, China's population had decreased by almost 850,000, to 1.41175 billion, according to the National Bureau of Statistics.

The National Bureau of Statistics thought that the sharp 2022 population decline was due in part to Covid restrictions, and would reverse itself in 2023. Foreign demographers doubted this explanation, however.

China has tried to incentivize larger families with money and larger apartments. But the current generation of Chinese is not interested in procreation, apparently.

"Beijing's demographic numbers have always been suspect, but recently distortions have gotten bigger," tweeted China critic Gordon Chang. "China in all probability, will lose more than two-thirds of its population by the end of this century." 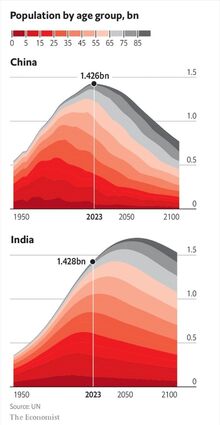 India's population will surpass China's this year, in 2023.

Over the long term, China's population would drop by 109 million by 2050, which is more than 4 times greater than the decline the PRC had previously predicted.

Domestic planners worry that China will age before the country can become wealthy. This will slow the economy as revenues decline and government debt rises as a result of skyrocketing health and welfare spending.

"The decline, which is the greatest since 1961, the final year of China's Great Famine, supports forecasts that India would surpass China as the world's most populated country this year. This historic development is likely to signal the beginning of a protracted period of population reduction, which will have significant effects on China's economy and the rest of the world," tweeted one China critic who resides in India.