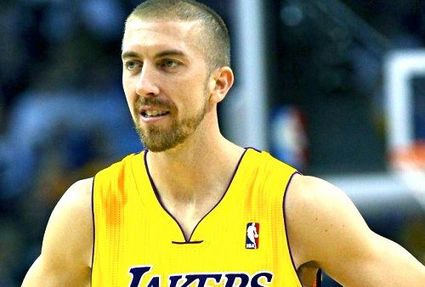 Every player on the team is subjected to two opposing forces:

Negative Force: drives the player to detach from the team

Positive Force: bonds and connects the player to the team

In my opinion Steve Blake is the player who contributes most significantly to the group's bonding force on the court.

Sadly, it seems like the Lakers have given up the strongest positive force on the team, the BG bond that unifies five players into one cohesive unit that keeps running forward. Then despite the many losses this group has absorbed Blake didn't blow out the fire - once the flame on the court begins to catch, his spirit will blow it higher.

He brings an agile spirit which is wise and can see the bigger picture, a spirit that maximizes his friends' potential.

Blake is a caring team player, a soulful player who brings much life to the game but now he has been traded to the Golden State Warriors.

The Lakers keep surprising with the decisions they make.... what really got to me was what General Manager Mitch Kupchak said -

that money is not the issue, and is not the driving force behind the decisions -

If so, dear Lakers decision makers - where are you headed without your team's backbone?

Due to too many business-based decisions the team lost it's heart and soul.

For dear Blake, I wish that the Golden State Warriors will provide a fertile ground for him - that the spirit of unity, support, enthusiasm, rhythm and fun will allow him to soar, and will only boost his game.