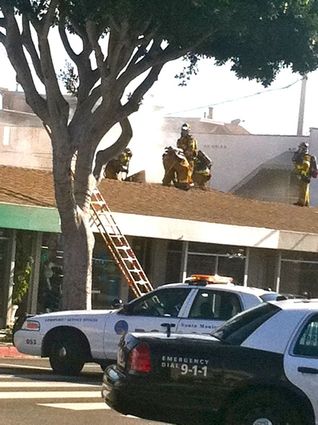 A longtime Santa Monica Real Estate Agent Red Erickson died in a fire Sunday on the corner of Montana and 11th Street.

Three fire fighters suffered smoke inhalation, and one other resident of the structure was hospitalized.

The fire was located in a combination business and residential building at 1030 Montana Avenue.

Deputy Fire Chief of Operations Tom Clemo confirmed that Mr. Erickson died on Tuesday night of the injuries he received in the fire. "We received a call for a Structure Fire, Victim Trapped on Sunday the afternoon at about 330. Early calls said one if not 2 victims were trapped. Residents heard someone banging on the front door of the residence, on the Montana side. On their arrival, firefighters forced their way into the front door and found Red inside nearby. They began CPR, and transported him to the hospital" he said

"A second male patient was found inside, and he was extricated from the building. Then the fire was knocked down," Clemo said.

"When the fire fighters entered the toxic environment, they suffered smoke inhalation injuries themselves. Those 3 officers were take to the hospital and were released," he said.

Los Angeles Fire Fighter Butler told the Observer that LAFD responded because of mutual aid agreements between the cities of Los Angeles and Santa Monica. "And while we're here, we go out on other calls too. Same with them, same with Santa Monica, when we call on them for help, which we do whenever there's a nearby active fire." He added that "the entire Santa Monica Fire Dept. is here today."

The SMFD press release reads: "The SMFD responded to a reported commercial structure fire at 1030 Montana Avenue with reports of possible people trapped inside. Upon arrival SMFD units reported smoke and fire coming from the building and initiated fire suppression and rescue operations simultaneously. One male patient was found by SMFD crews and extricated from the front of the building with third degree burns and in cardiac arrest. The patient was treated by SMFD paramedics and transported by AmeriCare ambulance to SME."

"A second male patient found inside and assisted out by SMPD Officers was also treated by SMFD paramedics and transported by AmeriCare ambulance to SME in serious but stable condition. The fire was quickly extinguished and a thorough primary search was conducted with no one else found. Three SMPD Officers demonstrated signs of smoke inhalation and requested medical attention. The 3 SMPD Officers were treated by SMFD paramedics and transported via AmeriCare Ambulance to SJH ER for further medical evaluation. The fire was contained to one occupancy, the fire building (1030 Montana Avenue) with minimal smoke damage incurred by the adjacent units. The Los Angeles Fire Department along with the Culver City Fire Department assisted by providing resources to help with the fire and to cover our city with other emergency calls that took place during this time period. A cause and origin fire investigation was initiated and the results will be added to the fire report when it is concluded. No other injuries were reported."