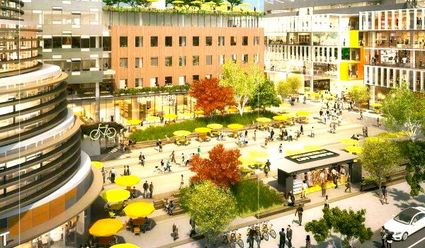 The City Council seems inclined to allow a referendum on the Bergamot Transit Village project to go to voters.

The council unanimously voted to "receive and file" the petition. Over 13,500 signatures were gathered over the course of 30 days in February and March by opponents of the 765,000 square foot project, which the City Council had previously approved.

The Council scheduled a hearing at its May 13 meeting to decide whether to rescind approval of the project, schedule a special election or put the referendum on the November ballot.

"I can't think of anything more Santa Monica than 10,000 residents getting together to let this council know that a decision is not what they want. That's what democracy is all about," said Councilmember Kevin McKeown. He had voted against the project in February.

The petition was passed on to the Los Angeles County Registrar of Voters, who verified that 7000 signatures were valid, qualiftying the measure for the ballot.

"It's wonderful that 10,000 people signed it," said Mayor Pam O'Connor, a Hines project supporter. "That means there are 45,000 other registered voters in Santa Monica that have not weighed in on this."

Former Mayor Mike Feinstein spoke Tuesday in opposition to calling a special election, which City officials said would cost about $200,000, to decide the fate of the project.

"If you were to spend $200,000 of public taxpayers' money on a special election, meaning far less voter turnout, I fear it would come across as pulling a Chris Christie," said Feinstein. "Residents used a pro-democracy tool: the referendum," Feinstein said. "To then give them less democracy in a time when people are not turning out to vote, it would be questionable and against what this community is about.. . . I think what the residents here are saying is that they're not against anything, but this was the wrong mix, both the amount and deepness of the affordable housing and the job housing balance."

As approved, the Bergamot Transit Village would be divide into roughly 60 percent commercial space and 40 percent residential, or about 427 apartments.

Of the four people who spoke Tuesday, perpetual council candidate Peace Activist Jerry Rubin was the only opponent of the referendum.

"To undercut the process like this is so un-Santa Monica. If people really understood what [the referendum petition] was saying, they wouldn't have signed it. I know I didn't."

Brenda Barnes spoke in favor of the referendum. She recently lost her trailer park to developers.

"I was a tour guide for some people from Ireland and England for two days this week," she said. "They were here eight years ago and we were seeing different things this time and they asked, 'What's wrong with this traffic?' It was 12:15 when the traffic was stuck going east."