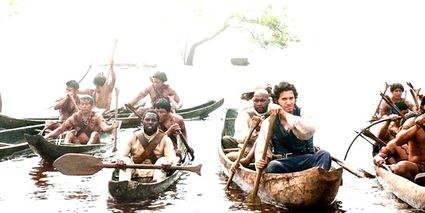 Simon Bolivar is a name known throughout the world. A military leader, a statesman, a politician, Bolivar helped shape the face of the world - and particularly the Americas - as we now know it. Instrumental in leading Venezuela, Columbia (which at the time included Panama), Ecuador, Peru and Bolivia to their independence from Spain in the early 19th century, anti-colonialist Bolivar was the founding force behind the formation of Gran Columbia, the first republic of nations within Hispanic America, of which he was president from 1819-1830. It was Bolivar who lay the first foundations of democracy in the region. Fighting over 100 battles against the Spanish Empire, during his quest Bolivar rode over 70,000 miles on horseback, covering twice the territory of Alexander the Great as he faced his own Gordian Knot - liberating the people of Latin America from Spanish rule. The country of Bolivia was even named for Simon Bolivar. Like many of his earlier American counterparts, including George Washington to whom he was also compared, Bolivar was also a freemason. And now, director Alberto Arvelo and a cast of thousands led by Edgar Ramirez in the title role, span the globe to bring us the sweeping (and oh my yes, Oscar-worthy) epic LIBERTADOR - THE LIBERATOR.

Wow! Talk about an opus, an epic! Written by Timothy J. Sexton, THE LIBERATOR is on an historical and technical par with Spielberg in the vein of "Lincoln" or "Saving Private Ryan", with the historical reference and significance of D.W. Griffith and a film like "The Birth of a Nation" or Eisenstein's "Battleship Potemkin, while produced with the meticulous scale and intensity of Cecil B. DeMille. History comes alive with texture, tragedy and triumph, beauty and pain, passion and indifference, but always maintains the core ideals of Bolivar and the freedom fighters. Although there are some biographical liberties taken with Bolivar's life, they are few and far between. Battle scenes are singularly award-worthy, not only on the pure spectacle, but the horrifying reality of war and its casualties. But it's the performances, and more than any other that of Edgar Ramirez, that capture the intensity and passion of the man and the people, as well as our hearts.

Edgar Ramirez. Talk about taking one's breath away!! He IS Simon Bolivar. The son of a military man, it is beyond obvious in his portrayal of Bolivar that he was an observant child and learned about the mind and manner of military men from his father. His stature, conviction, physical cadence, vocal intonation and inflection; all are precise, passionate, unequivocal, unwavering. Ramirez speaks with his eyes with a convicted defiance and passionate caring. He is a revelation. Do not let this performance go by without an Academy campaign for Best Actor. Ramirez has such command of the screen, such an intensity, and such a powerful presence that within moments you forget you are watching a performance. Even in tender moments of Bolivar's younger days during his courtship and marriage to the love of his life, Maria Teresa, and her subsequent death thereafter, Ramirez fills the screen with tacit emotion thanks to a look, a simple but deliberate easy gesture of a hand or a smile, a tear. His performance is indelible, unforgettable. Revelatory perfection.

Fascinating performances comes from supporting actors, Gary Lewis and Iwan Rheon who bring conviction and dedication to their characters, Irish soldiers, James Rooke and Daniel O'Leary. A testament to Sexton's script is the attention to history and the scope of Bolivar's influence as reflected with characters like Rooke and O'Leary. Much as George Washington and his relationship with France, Bolivar had an ally in Great Britain and the British Empire and its holdings, including Ireland. This inclusion into THE LIBERATOR not only captures historical events, but tells of the global impact of Bolivar and his revolution for a republic, banding together a multi-cultural and multi-ethnic palette to aid in Bolivar's fight. Were these two roles of Rooke and O'Leary in the hands of less skilled actors, the impact would not have been the same and the characters dismissed merely as soldiers, forgetting that they are Irish and crossed the Atlantic to help.

As fictitious British banker Torkington, Danny Huston is a slimy delight. Representing an amalgamation of the bankers and investors of the day who were willing to finance Bolivar's revolution when they saw it as means to line their own pockets, Huston plays Torkington perfectly, instilling mistrust in the man from the beginning so that we - as Bolivar - are always on guard when he's around. A testament to Huston's skill is a climactic scene between Torkington and Bolivar when any friendship is ended and Bolivar puts him in his place. Huston's facial expression is frightening and shocking when truths are revealed.

Not to be overlooked is Maria Valverde who brings a strength and lightness to her performance as Maria Theresa Bolivar. Also adding a female touch - although anything but delicate - is Juana Acosta who plays Manuela Saenz, Bolivar's mistress in his later years and a socialite sympathizer who saved him from assassination multiple times. Acosta plays it close to the vest, adding elements of intrigue buttressed by feminine wiles.

An extremely well crafted story takes us through not only more than three decades - the journey of which is benefitted not only by scene titles indicating passage of time but through costume - but constantly reminding us of the geography of South America and the magnitude of Bolivar's quest. Wide angle and widescreen panoramic vistas of the Andes, the rivers, send home the message of the gravitas of the situation, of the time, the importance of strongholds while metaphorically solidifying the subtext of the passion of the fight. I fully expect potential Oscar nods for costuming, possibly production design and cinematography.

Opening in 1828 with Bolivar narrowly escaping yet another attempt on his life, THE LIBERATOR then rewinds to Bolivar's early days when a young uppity man visiting the Spanish court where he engages in less than acceptable badminton conduct with the future king of Spain, Prince Ferdinand. It is also here where he meets Maria Teresa, the woman who - as Bolivar himself stated many times during his lifetime - changed his life and whose death from yellow fever altered his destiny.

Moving north to Paris, Bolivar tries to drown his sorrow over Maria's death, but is instead taken under the wing of Simon Rodriguez. A man deemed "radical" by many for his politics and philosophies, Rodriguez not only begins to tutor Bolivar in the ways of the world and politics, but pushes Bolivar's thinking towards revolution and freedom from colonial rule.

Heading back to Venezuela, thanks to his family wealth from land ownership and plantation crops, Bolivar himself funds a small army as he begins his trek towards freedom from Spain. As liberation grows, so do supporters on the ground and in supplying funds and arms. But from small acorns do mighty oaks grow and by 1819, Bolivar is appointed president of Gran Columbia, a republic uniting the liberated Spanish colonies.

But as history marches on, so does Bolivar's story, bringing us back to 1828.

THE LIBERATOR represents a reuniting for Ramirez and director Alberto Arvelo and we are all the better for it. Interesting is their depiction of Bolivar in that while we see his public trials, tribulations and achievements, although given a glimpse into the beating heart and soul of the man, Ramirez and Arvelo manage to retain the larger-than-life iconography of the man. So often, a director and/or actor will go off the rails and dig into the biopic subject, trying to pull more gravitas, more emotion, more of "the man behind the mask". Here, Bolivar is already filled with so much life and legend, it's a tricky line to walk and interesting methodology to pursue to hone in on the period of his life as "The Liberator", but it works.

When it comes to cinematography, Xavi Gimenez' work is flawless. Lush, gorgeous to look at, THE LIBERATOR is lensed widescreen on 35mm film. Most striking is the high gloss finish and polish of the film that almost serves as a pretty facade and mask to the grit and horror of the story happening below the polish. Brilliantly designed and executed. Already a huge admirer of Gimenez and his work after seeing "The Machinist" a decade ago and then "Red Lights" and now with the tv series PENNY DREADFUL, with THE LIBERATOR, he takes my breath away. Perfectly blending the beauty and ruggedness of the visual topography and landscape of Venezuela and surrounding regions with the grandeur of emotion emanating from not only the story itself but Edgar Ramirez' performance, Gimenez and Arvelo create a visual brilliance that mirrors Bolivar's own vision. Hand in hand with Gimenez is the work of editor Tariq Anwar who tells his own story with the precision of pacing and cuts - particularly with the battle sequences and with the traveling camera sequences trailing Bolivar in bookended opening and ending scenes.

One of the costliest films to ever have been produced in Latin America, THE LIBERATOR is rumored to have a $50 million budget, every penny of which is seen onscreen as director Arvelo crosses South America and the ocean, shooting in multiple Venezuelan cities as well as 12 Spanish cities. Terrain is rugged. Weather taxing. Contrary to what so often happens with countries who appreciate and fund the arts, no funding of THE LIBERATOR came from the Venezuelan government. The film had such appeal so as to be privately funded. 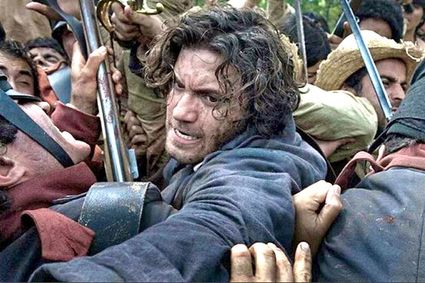 There are no words adequate to describe Gustavo Dudamel's score. Lush, sweeping. This is what Max Steiner would be delivering if he were scoring "Gone With the Wind" today. Not only emotionally evocative, but the music embodies the emotional essence of the fight, of the people's passion, of Bolivar himself.

THE LIBERATOR - Action and adventure, life and death, love and betrayal, and at the heart of it all, a man who dreamed beyond himself and fought for those dreams. Sweeping, epic, masterful. What screenwriter Sexton, director Arvelo and Edgar Ramirez have done cries out for your attention and Oscar gold..