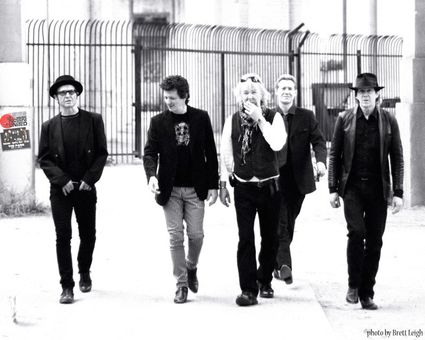 Imagine it's 1965 and everywhere in smoky, crowded underground music clubs in the basements of London there are crazed British art students going mad for old American blues. Fueled by youthful energy, questionable substances and a distaste for pre-packaged bubble-gum pop music, bands pound it out on sweaty stages while fanatics shout, dance, and gyrate into the wee hours of the night. Their blues music is now pushed, amped, warped and exploded into a new extreme that has one foot in the historic Delta blues and one foot in the future. For many, music peaked then and there. The Roosters United pick up that brilliant sintering moment and deliver it in all its blazing glory right now to your eager, itchy heart and soul... even if it's right on the Santa Monica Pier in the very opposite of a smoky club: Rusty's Surf Ranch.

This is a return engagement for The Roosters United and in the time since their last show at Rusty's they've added a new drummer and keyboardist as well as many new original songs.

The Roosters United are currently recording an album of originals and favorite covers and they can often be found playing local clubs as well as on the web: http://www.theroostersunited.com, http://www.facebook.com/TheRoostersUnited/, http://www.reverbnation.com/theroostersunited/ and on Youtube.