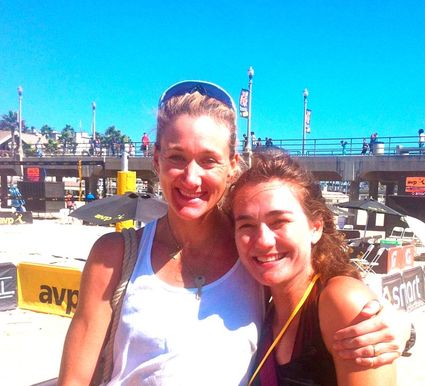 As a professional volleyball player in my younger years I have a special affinity to that sport.

As an Israeli woman I was obligated to serve in the army for two years which unfortunately ended my indoor volleyball career. But as we know, everything happens for a good reason.

That was the trigger that started my beach volleyball days.

But as we know it's not hard to generate such a positive energy when you are the best player in the world continuously. But in the end of the day whether you're famous and successful you face the same conflict of how to shift the mindset to a better place and how to roll with changes.

Kerri has had three different partners which is not easy in beach volleyball if you want win championships.

And despite this potential difficulty it looks like she took the best of it and it helped her to become a better player and better human being.

As I asked her in Huntington Beach after she and April Ross won the final AVP tournament of the year, making it eight championships in all eight tournaments

What really surprised me was finding that behind that successful athlete there is a humble being, warm, sweet, generous, honest and a strong believer in God.

The answer was very mindful from my point of view. The key was that she believes in God strongly. She believes that everything that's happening is a growth lesson and she tries to do her best by following her path.

So that's how she naturally generates optimism.

The second answer was even more inspiring. According to her experience the key for a smooth transition is to open your heart to your partner.

And I as a "zen ball" writer I'm amazed what an great being is this lady who has ruled the world in beach volleyball but she's also a great role model to walk the path with truth, simplicity and love.

Kerri Walsh Jennings and partner April Ross have become the first team in AVP history to win every tournament in a given season. Their victory at Huntington Beach was their eighth in eight tries...

Walsh is looking forward to the 2016 Olympics which will be held in Rio...