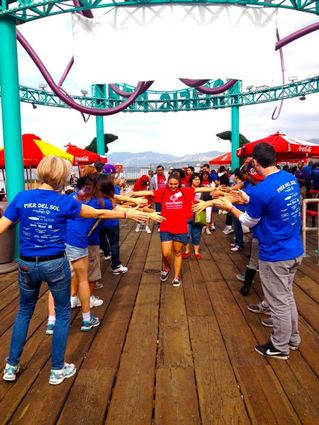 The event will honor The Coca-Cola Company which has been an Official Global Partner of Special Olympics for 46 years. Its 2015 support will benefit the 7,000 athletes competing in the Special Olympics World Games in Los Angeles.

The event will be a fun day at the pier for the whole family to enjoy together while making a difference in the lives of Special Olympics athletes. There will feature music, entertainment, and a silent auction with prize packages from shopping sprees to local entertainment. There will also be arts and crafts and karaoke, as well as all the rides and games of Pacific Park and game booth prizes.

Also included is a VIP brunch provided by 38 of LA's top restaurants, including Chef Michael Cimarusti of Providence, Chef Olivier Rousselle of On Sunset, Chef Tanino Drago of Tanino Ristorante, and Chef Ermando Robles of Porto Via.

Many celebrities and sports figures will pitch in, including Maria Shriver and Los Angeles County Supervisor candidate Bobby Shriver attending as honorary chairs.