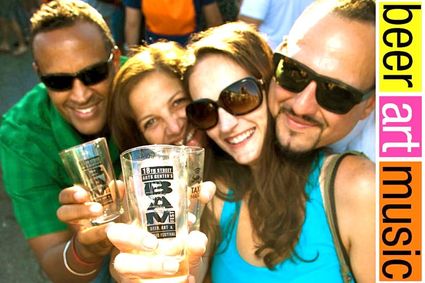 BAM attendees will get to visit the studios of 18th Street Arts Center's artists-in-residence and arts organizations like Otis College of Art and Design's MFA in Public Practice program - where art is not just exhibited, but actually created.

Twenty minute mini-educational sessions by craft beer, wine, and art experts will cover a wide range of topics such as how to pick out food flavors from different beers or how art could be paired with wine and beer. All proceeds benefit 18th Street Arts Center.

Along with Golden Road Hefeweizen, Golden Road Brewing will also be featuring its Might As Well IPL, a lager highlighting bold passion fruit and pear contributed by Galaxy and Calypso hops.

Though the focus is on beer, there will also be wine sampling hosted by wine enthusiast Allie Merrick and non-alcoholic home-brewed sodas by the Maltose Falcons, America's oldest Home-Brewing Club.

Also featured are Mama's Boy Infusions, the one of a kind tequila fruit infusion with an original chili kick as well as the semi-sweet, orange-blossom honey mead of Golden Coast Mead's Mirth in a Bottle.

The tunes lined up for BAM Fest is as diverse as the beer samples - from the Latin infused rhythmic sounds of KoTolàn whose songs celebrating cultural diversity are sung in Japanese, Spanish, and English to the dance-inducing soulful funk of Nick Shattuck. The young duo of the new hit band Trapdoor Social will bring its passionate alt-pop music to bring awareness to solar and other renewable energy sources.