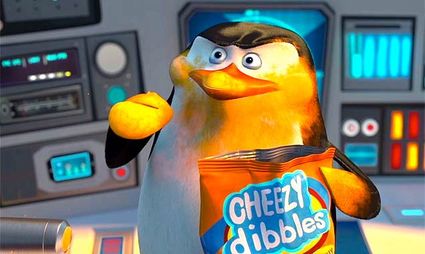 As has become crystal clear over the past several years, DreamWorks Animation more than gives Walt Disney Animation Studios and Pixar a run for their money when it comes to animated features. With it's own distinctive styling of rich, vibrant colors like those seen in "The Croods" or "Turbo", character and background design are drawn with a slightly skewed shaping and outlining that have a touchstone quality to Saturday morning cartoons, while action and adventure is non-stop, high octane, high energy and over-the-top, and characters and stories are fueled with laugh-out-loud hilarity, funny, DreamWorks consistently delivers bar-raising animation excellence. And now, going still one better than it has done with the lovable franchised gang we first met in "Madagascar", gives its star players - Skipper, Kowalski, Rico and Private - their very own film with PENGUINS OF MADAGASCAR. Comedy, action and heart all rolled into one, PENGUINS OF MADAGASCAR is simply DIBBLICIOUS!!!!!

Our story opens deep in the heart of Antarctica where a noted documentarian is filming his own "March of the Penguins". Ironically, the documentarian sounds just like the inimitable Werner Herzog. (Let's face it, PENGUINS had me at Herzog!) While some humorous visual double-entendres serve as an underlying commentary on filmmaking, we quickly learn that this is the origin story of the now beloved, Skipper, Kowalski, Rico and Private.

Opining on the merits of breaking away from the Waddle to chase after a runaway egg rolling aimlessly towards a frozen precipice that will find the egg plummeting either into the icy sea waters or smashing on some ice, these future heroes set their course and it doesn't take long before the boys glide into action and determine to save that egg. And of course, the chick that hatches is none other than Private.

As the quartet acts fast to save themselves from leopard seals and exploding barges, they are soon drifting away on their own private floe out into the wilds of the world.

Fast forward to present day and we find our group embroiled in the most secret of all secret adventures as they break into Fort Knox. Lots and lots of gold! Enough for a lifetime! But gold ingot and bouillon aren't what the boys want. They're after another kind of gold. It's Private's birthday and he is getting the gift of a lifetime - Cheesy Dibbles from the very last Cheesy Dibbles vending machine on Earth! (And we all know how much the penguins love Cheesy Dibbles.)

But this delicious birthday surprise isn't all it's cracked up to be as the vending machine is actually deep cover for the evil Dr. Octavius Brine aka Dave, a big purple octopus who was once the big attraction at the Central Park Zoo; that is until the cute, adorable penguins arrived and sucked the limelight from under his tentacled self. A nice octopus, a party animal, always with a smile and a glad-hand for all, how could this happen? Nevertheless, shipped from zoo to zoo around the world, Dave always met with the same fate; glory one minute and the next, out-flipped by flippered penguins. Well, no more. Dr. Brine takes the boys hostage and divulges his evil plan - kidnap all the penguins from every zoo around the world in which he has been shunned and with his new and improved Medusa serum, make all penguins ugly, frightening and unadorable.

Awakening in a secret underground lab in Venice, Italy, it doesn't take long for the boys to escape Brine's suctioning grasp and embark on a wild chase through the Venice Canals. And just when it looks like they may have met their match in Brine, help comes in the form of The North Wind. A highly classified, super-secret group of covert operatives, The North Wind travel the world helping all animals in peril. Led by Agent Classified, "an all-action wolf" with more than a bit of Alpha male 007 cockiness, North Wind has known about Brine for sometime but their Intel missed the mark. Realizing he can use the Penguins to get the right information, Classified helps rescue them from this first encounter with Brine and brings them to North Wind HQ where a battle of wills - and wits - ensues between Skipper and Classified. Classified wants his team - small seal Short Fuse, brains of the outfit wise owl Eva, and the fun-loving yet imposing polar bear named Corporal - to handle the Ops while Skipper argues the Penguins are the men for the job.

Drugging the Penguins and shipping them off in a cargo hold to parts unknown in order to clear the way for the North Wind to capture Brine, plans run amok for everyone when the Penguins awaken and put their own plan into motion. Globetrotting around the world - Venice, the Sahara Desert, Shanghai, Rio de Janeiro - before finally ending up where Brine's hatred began in Central Park, no matter whose plan it is, it's gonna take everyone on their "A" game" to save the penguins of the world and defeat Brine and his Medusa Serum.

It's not often when I can say that a script is smartly written not only with dialogue but allowing for visual gags, but I can here. Scribes John Aboud, Michael Colton and Brandon Sawyer deliver one of the most fun and entertaining scripts of the year. And yes, while we have the requisite "breaking wind" humor that kids find so hilarious, it's the witty one-liners that will have adults rolling in the aisles with all the Hollywood based puns, e.g., "Nicolas, cage them!", "Drew, Barry, more!", "Charlize, they're on the ray!". Adding to the experience and the laughter is that while many of the more intricate comedic set-ups involve Skipper with some routines very Abbott & Costello, it's John Malkovich who is on fire with the one-liners.

Going beyond the lovable Penguins (yes, Dr. Brine - lovable Penguins), characters are fun and beyond identifiable and engaging, albeit not as well-developed as the Penguins. Succinctly melding the visual character with its purpose, the result is smart enough to get a chuckle from adults while entertaining enough to have kids laughing and giggling. Each and every character - but especially the Penguins - just steal your heart! Does PENGUINS OF MADAGASCAR reach the depths of emotional layers and levels of a Disney or Pixar film? No. But it's not meant to. These are Penguins. Penguins are fun. While building on the frolicsome adorableness of the public perception of the species, it's the carefree haphazard hilarity that is what engages and entertains for this audience, be it for those looking for heart or those looking for laugh out loud slapstick. This is fantastical fun escapism at its animated best!

But what sells the characters here is the voice cast, starting with John Malkovich who is pure genius as Dr. Brine/Dave. Benedict Cumberbatch is on fire this year as he goes toe-to-toe against himself at the box office this holiday as Agent Classified in PENGUINS OF MADAGASCAR and as Alan Turing in "The Imitation Game." He is riveting in both roles but here, as Classified, brings a Sean Connery 007 element to the character while also humanizing the agent. Take away gadgets and gimmicks and it falls to brainpower and voice to tell the story. Thanks to Cumberbatch's comedic timing as the straight man, Classified lands some real belly laughs for the audience. As Corporal, the Norwegian polar bear member of North Wind, Peter Stormare is both gruff and polar bear cuddly with a big heart. "Stunt voice casting" may be in play with Annet Mahendru as the North Wind intelligence analyst Eva. Like her most well known tv character to date, Russian spy Nina Sergeevna on "The Americans", Mahendru gives Eva a Russian accent and more than a bit of mystery. And yes, it does look like Eva and Penguin Kowalski have a thing for each other. Ken Jeong packs a punch as the explosive Short Fuse.

And then there's the Penguins. Returning as the tuxedoed quartet are Tom McGrath as Skipper, who really comes into his own as a leader and head of a family this time out; Chris Miller as the over-analytical Kowalski; Conrad Vernon as Rico; and, Christopher Knights as Private. Each character sees major character development, but more importantly, thanks to the voicing of McGrath, Miller, Vernon and Knights, resonate as a family. The vocal nuance in delivery is familial, recognizable and feels just like one of us might be talking to an older sibling or parent, battling for position, fighting to shine within the family unit. This is particularly well done with Skipper and Private, as Skipper must learn to accept suggestions from someone other than himself while Private must find a way to make himself heard. McGrath and Knights are exemplary with their emotional footing.

"Madagascar" veteran, director Eric Darnell, teams up with franchise freshman Simon J. Smith to give us the trip of a lifetime with PENGUINS OF MADAGASCAR. Celebrating the improvisational nature of who the Penguins themselves are, Darnell and Smith bring that same energy, freshness and fly-by-the-tip-of-a-flipper inventiveness to the action set-piece. Rapid-fire, fast-paced, high octane, razzle dazzle is beyond glorious; especially with the eye-popping use of color and design line. And the 3D is spectacularly executed. The result is nothing short of being wildly entertaining.

While solidly planting itself in the animation spectrum as a film for families that's about a family, it's thanks to the non-stop madcap mania and zany antics that makes PENGUINS OF MADAGASCAR the go-to family movie of the holiday season.

PENGUINS OF MADAGASCAR is a witty, warm and wonderful DIBBLICIOUS TREAT!