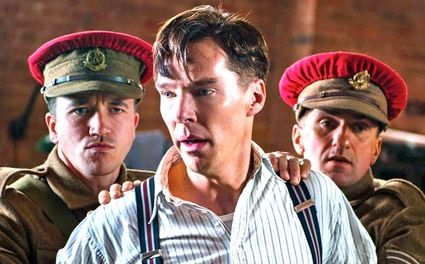 As you are reading this very column, be it online or in print, one of the people responsible for this luxury is the very man celebrated in THE IMITATION GAME - Alan Turing. Although director Morten Tyldum focuses on Turing's life in the context of WWII and the genius of his mathematical and codebreaking skills, it is thanks to Turing's work for the Allies during this time at Bletchley Park, the Government Code and Cypher School, that an early version of the device we now know as "the computer" was born. Working from a script by first time scribe Graham Moore, the Norwegian Tyldum (who marks THE IMITATION GAME as his English-speaking directorial debut), rivets us with historical and personal intrigue, all brought to life thanks to one of the most masterful performances of the year by Benedict Cumberbatch as Alan Turing.

Opening in 1952 England, we first meet Turing as he is being investigated and subsequently arrested on charges of "gross indecency." 1952 England meant homosexuality was as much closeted and secreted as Turing's codebreaking in 1939, and to be discovered or caught in the act, meant jail and/or medical castration. Turing's story unfolds as he tells a rapt police detective his entire history (Thus employing the very helpful technique of voice-over narration in this particular instance.), starting with 1939 shortly after England's entrance into WWII.

Only 27 years of age and Turing was already the best of the best. As a mathematician, he was unparalleled, and had been since his early days at boarding school. Already the war wasn't going well for England or the Allies. They were always one step behind the Nazi war machine thanks to an unbreakable German code known as "Enigma" which was used to encode all military transmissions, thus preventing England from obtaining any really useful intelligence. At Bletchley Park, home of the Government Code and Cypher School and operations headquarters for the team of cryptologists working to crack Enigma, things weren't going too well for them either. No one had the skill to break Enigma. So it was no wonder that on applying to Bletchley, Turing was immediately put into service.

But for Turing, a young man who was always on the outside looking in, always sitting alone at lunch, not playing with anyone at recess, his social skills were anything but sociable and if he was being graded for how well he plays with others, that would be his one failing grade. Alienating everyone on his team, but for MI6 agent Stewart Menzies, Turing is relegated to playing second-fiddle to alpha male of the group, Hugh Alexander. Dissatisfied with the pecking order, Turing appeals directly to Winston Churchill, pleading a case for his superior skills. And Churchill goes for it, putting Turing in charge of the team.

Not just content with being the man in charge and able to focus on his idea of creating a machine that will mathematically break the code (which, by the way, was changed daily), and needing his own allies within, Turing hires more men - and one woman, Joan Clarke. Impressed with Clarke, and a bit perturbed when her problem solving and cryptology skills are far better than even Turing's, Joan begins to serve another purpose; as buffer between Turing and Alexander, eventually bringing the boys all together to work as one; but for how long and at what potential cost as someone on the team knows Turing's long kept secret of homosexuality.

With the clock ticking and Allied losses heavy, Turing and company try to keep the military wolves at bay as they move ever closer to making Turing's machine (dubbed "Christopher" after his childhood love) the long dreamed of codebreaker.

Let's just say it now: Benedict Cumberbatch. Oscar nomination please! Like Mark Strong and Matthew Goode, all three are custom made for cloak and dagger roles. In THE IMITATION GAME, each delivers enigmatic performances that challenge the audience to think and look below the surface for the truth of each real life character portrayed. Cumberbatch gives Turing this nervous edge of extreme singular focus that is buttressed with beads of sweat, nervous ticks, submissive head down plowing straight ahead body language. When playing opposite Keira Knightley, you feel a leveling of the playing field while Cumberbatch even emits vibes of jealousy in scenes where Knightley's Joan is chatting or dancing with Goode's Alexander. Very nuanced subtleties. An interesting element that Cumberbatch gives to Turing is an ever-present conviction of "do or die" that leaps off the screen.

And then we have Mark Strong. Such presence!! Stewart Menzies was a well known puppet master in intelligence and Strong embodies that essence perfectly, always having a look of "there's more here than what you see." He brings it to every performance, but as the commanding MI6 agent, particularly so. But what I love with Strong's performance here is that in the presence of Charles Dance's Denniston, there is always a bit of gravitas punctuated with a look of surprise, as if giving Denniston the illusion that he is the one in control. It's a delightful, devious dance. And be on the lookout for a surprise twist involving Russian spies, Menzies and Turing. One of the highlights within the film, Strong's monologue playing against looks of utter shock by Cumberbatch are simply divine.

When it comes to chess champion turned codebreaker Hugh Alexander, Matthew Goode delivers one of the best performances of his career (although "Stoker" is the absolute best). He plays Alexander with suspicion, defiance and arrogance, but then completely shifts tone providing a wonderful emotional arc. The chemistry between Goode and Cumberbatch is a perfect yin and yang with the upper hand in different scenarios see-sawing back and forth between the two.

Keira Knightley is the glue in this mix and the tether between the world/society and Alan Turing. Knightley also has some very powerful intense scenes which she delivers with so much conviction and passion so as to almost be frightening. And the ease between Knightley and Cumberbatch is engaging, evoking a sense of palpable comfort.

I admit that I was captivated, absolutely riveted to the story behind cracking Enigma - which I knew a little bit about but nowhere near enough - but to see it play out with such intricacy and intensity, simply enthralling. Tyldum and Moore steep us in history and information. Thanks to meticulous production design, there is very specific attention to the electrical detail and intricacies of the schematics for "Christopher" and the very cloak and dagger nature of the very buildings in which the codebreakers worked and in which "Christopher" was housed", all of which elevated the story to an immersive experience. Then toss in the fact that much of the film was actually shot in Bletchley Park; history is well represented, portrayed and explained with authenticity, which is fueled not only by the dialogue and performances, but then punctuated with archival newsreel and propaganda footage.

Problematic, however, is the final act of the film, most notably the last few minutes. The audience knows and has known, even before the "big reveal" that Turing is gay thanks to Cumberbatch's performance which is imbued with stereotypical shadings of the day that he executes eloquently. However, when the film returns to the 1952 present and the criminal charges for sexual perversion against Turing, title cards pop on screen taking us out of the historical impact of Turing and Enigma, creating a desire and need to see more about the "hidden" Turing. In those final moments, the historical impact of the film from the standpoint of Enigma and the war feels undermined, and the discussion on homosexuality of the day feels shortchanged. While it is obvious that Tyldum and Moore are metaphorically analogizing Turing's secret with the secrets of the war, the narrative thread somewhat falls apart and takes away the intensity of intrigue.

Interesting is the use of color which is something you don't often see in historical war time films as most directors choose to paint a grey, muted brown or denatured canvas, ignoring the fact that clothing and home decor did make use of color a a means of "cheering up" and "lifting civilian morale." Here, Tyldum uses pops of color set against a richer brown background, creating a refreshing feel, not to mention creating a beautiful metaphor for life against the backdrop of horror and death of war. These little touches throughout the film just add to the texture, the richness of the story and the importance of the events at hand. The balance of life and death and urgency of cracking Enigma is ever-present without being thrust front and center; it is imbued within the production design and the performances. 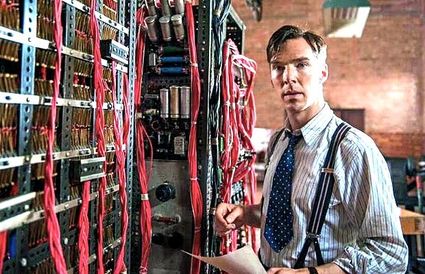 Oscar Faura's cinematography dazzles with depth, infused with a cinematic texture that breathes while William Goldenberg's editing is flawless when it comes to building tension.

Standout, and it wouldn't surprise me to see an Oscar nomination for scoring, is the work of composer Alexandre Desplat. Inserting the single note tinkling of piano keys within the score, like a ticking clock or, in this case, a ticking time bomb, sears the tension and desperation into the soul.

Written by Graham Moore, based on the book "Alan Turing: The Enigma" by Andrew Hodges