MOVIE REVIEW: NIGHT AT THE MUSEUM: SECRET OF THE TOMB

I was one of the lucky few press who, several months ago, was treated to some early clips of NIGHT AT THE MUSEUM: SECRET OF THE TOMB. My appetite for more was quickly whetted on seeing just brief glimpses of Sir Ben Kingsley and Rami Malek in all their royal glory, Ben Stiller as history's best friend Larry Daley, and that pee-happy capuchin Dexter (aka Crystal the Monkey). Now having seen the film in its entirety, I can honestly say that my enthusiasm and delight for NIGHT AT THE MUSEUM: SECRET OF THE TOMB is even more exuberant. Unfortunately, there is also a bittersweet poignancy not only for the film itself and some of its iconic actors, but for what is reportedly the last film of the three-picture franchise. Oh, say it isn't so, Shawn Levy! What Levy and company has done yet again is pure magic, making NIGHT AT THE MUSEUM: SECRET OF THE TOMB the best night ever.

We are first introduced to SECRET OF THE TOMB via a 1938 archaeologic expedition in Egypt. Paying homage to the patented imagery and styling of both Harrison Ford's Indiana Jones and Brendan Fraser's turn in "The Mummy", we are immediately given a story and historical point of reference for the Tablet of Ahkmenrah, the magical golden tablet we have watched in the prior two NATM films bring history to life in both the American Museum of Natural History in New York and at the Smithsonian. But the tablet has always been a mystery; a mystery which we are now going to uncover starting with its very origins.

Fast forward to present day, one time night guard turned anonymous benefactor and now head of the Museum of Natural History's renowned night program, Larry Daley is readying the museum and all of the exhibits for a show to end all show. Celebrating the grand re-opening of the Hayden Planetarium, Daley and all of the figures of history we have come to know and love - Teddy Roosevelt, Attila the Hun, Octavius, Jedediah the cowboy, Sacajawea, Ahkmenrah, and of course, Rexxie the T-Rex and Dexter the monkey - have prepared a show for a glitterati audience that will move heaven and earth. But just before showtime, strange things start happening as historical figures lose their life force and start have momentary freezes. Ahkmenrah is concerned something is amiss as the golden tablet is tarnishing and he has no explanation why. Dismissing the "glitches" and the tarnished tablet for the moment, Larry starts the show. The dazzling night sky comes to life with the constellations streaking across the planetarium heavens, themselves now coming to life thanks to the magic of the tablet. Suddenly, as the distinguished guests below are oohing and aahing at the magic of the museum's "animatronics" and light show, madness and mayhem take hold as a somewhat drunkenly behaving motley crew of "animatronics" go berserk. It can only mean one thing. The tablet of Ahkmenrah is losing its magic.

Needing answers not only for the museum figures, but for himself and the now fired museum director Dr. McPhee, Larry hits on a plan. According to Ahkmenrah, the one person who may have an explanation for the turning tablet and the fading magic is his father, Merenkahre. Problem is, he's safely tucked away on display at the British Museum. Well, we know what that means. Road trip!

With all hand on deck, and even Dr. McPhee lending a hand, Larry and the gang head across The Pond with hopefully enough magic left in the tablet to bring Merenkahre to life. Of course, not only will Merenkahre come to life, so will the rest of the museum - for the first time ever. And you thought there was hilarity and hijinks these past nine years in New York and at the Smithsonian! You ain't seen nuthin' yet; especially when Sir Lancelot faces off against Hugh Jackman as they fight for what Lancelot believes is the Holy Grail - the tablet. Hugh Jackman? Yep. But will Merenkahre divulge the secret of the tablet? And what will happen to the British Museum and its figures and exhibits after a taste of the night life? And what's next for Dexter, Attila, Teddy, Sacajawea, Octavius and Jedediah?

On crossing the pond to the British Museum, director Shawn Levy and screenwriters David Guion, Michael Handelman and Mark Friedman re-energize the film and the characters - and as I was so thrilled to see in the initial early clips - introduces new characters from the impressive and regal Sir Ben Kingsley as Pharaoh Merenkahre and a wonderfully light maternal touch from Anjali Jay as Shepseheret to the tongue-in-cheek hilarity and hunkiness of Dan Stevens' Sir Lancelot. But at its core is the heart and soul of the NIGHT AT THE MUSEUM franchise - Robin Williams as Teddy Roosevelt. Still the voice of reason, the teller of history, the wise elegiac who has steered Ben Stiller's Larry into the man he was supposed to and did become. Not knowing this would be Williams' final performance, the writers embrace the finality of the franchise and the construct of the story plot, letting Williams up the emotional ante, something which is now even moreso. Given how life has played out in the past year with the passing of not only Williams, but Mickey Rooney, there is a bittersweetness that cloaks the film and the characters with a loving touch that will touch each of us who see the film.

Once again expanding the story and adventures to another famous museum keeps the franchise and the film fresh and engaging - and historically plausible. As has been consistent with NIGHT AT THE MUSEUM, history truly does come alive, sparking creativity and interest in young and old alike. Taking it to the next technical level, the introduction of the constellations and the night skies is breathtaking. The visual effects of the opening gala and the midnight blue texture of sky with sparkling twinkling stars coming to life is pure magic and I guarantee will spark some young mind into the field of astronomy. On every level, Levy and company ups the ante, excelling with visual, story and character expansiveness, endearing each to our hearts even more.

Celebrating the CGI dependent visual effects, from the Parthenon Marbles to the Ming vases to a multi-headed Thai serpent, the visuals are wide-eyed, jaw-dropping entertainment which is marvelously melded with live action. This is truly some flawlessly funny CGI effects. Mind-blowing is a sequence involving the M.C. Escher "Relativity" which lends itself to one of the most visually complex scenes in the film. The entire sequence is a stunner as Larry, Teddy and Lancelot become part of "Relativity." Use of black & white punched with just a tinge of gold from the tablet is extremely well designed and executed.

Without a doubt, this is not only the best story of the three NATM films, but the one with the highest production values. Cinematographer Guillermo Navarro soars at creating mood with lighting and framing, particularly with a saturated moonlight blue London. A visual delight that really adds a dreamlike fantasy layer.

Levy keeps the film moving at a relatively fast pace, never allowing the audience to become tired or feel as if "been there, done that". Capitalizing on visual sight gags, and the short-listed Oscar work of VFX supervisor Erik Nash, live action and technology are a seamless meld, providing non-stop flow of story, action, laughter and tears; particularly when it comes time for the finale. It's the party of the century with some nice little twists and surprises.

Watching NIGHT AT THE MUSEUM: SECRET OF THE TOMB is like seeing old friends, as Ben Stiller, Robin Williams, Patrick Gallagher, Mizuo Peck and Rami Malek return as Larry, Teddy, Attila, Sacajawea and Ahkmenrah, respectively, with Owen Wilson's Jedediah and Steve Coogan's Octavius touching the heart and delivering on of the best buddy pairings in film history. Few but for Coogan and Wilson could really create tension - and comedy - while running from Mt. Vesuvius in a lava-laden Pompeii! And of course, Dexter! Who doesn't love Crystal the Monkey as Dexter. And I have to say, the pee jokes with Dexter do not get old. Kids love 'em. I love 'em. They're funny. How can you not laugh at Dexter peeing to stop a lava flow! And although not as successful as some of the other routines and gags in the film, it's welcome to see Stiller stretch a bit as his own Neanderthal ancestor, Laaa.

At first blush I was unimpressed with Rebel Wilson's Mindy, security guard at the British Museum, due largely to the flat "jokes" she was telling. But as the film progressed and once she had a Neanderthal to play off, she was a welcome addition. And then we get cameos from Hugh Jackman and Andrea Martin! A highlight are scenes between Jackman (on the West End as King Arthur in a "Camelot" revival) and the hottest knight of the round table we've seen in a while, Dan Stevens as Lancelot. Hunks, hotness and hilarity. What's not to enjoy? And what about Ricky Gervais as Dr. McPhee? So glad we saw the arc of his character come to fruition and end on a note of wonderment, kindness and fun.

But beware. Many of you, like myself, may find your eyes a little wet and your cheeks a bit moist as we see the comedy triumvirate of talent with Dick Van Dyke, Bill Cobbs and Mickey Rooney, the brilliance of Robin Williams and an end credit dedication to break the heart. 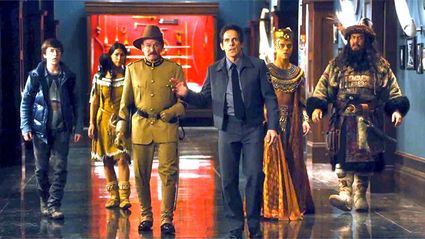 While Levy gives us a glimmer of hope for a continuation of the franchise, let me add my voice now and say, this is a franchise we shouldn't see end. History really does come to life thanks to NIGHT AT THE MUSEUM, sparking creativity and imagination, not to mention inspiring kids to learn a little something. What Shawn Levy has done, and particularly with NIGHT AT THE MUSEUM: SECRET OF THE TOMB is pure magic. This is entertainment.