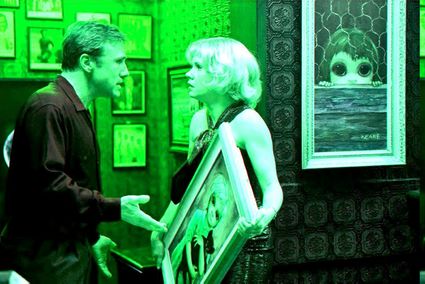 Delving into somewhat rare territory with bringing a true life story and real life individuals to the big screen (the last time being "Ed Wood"), one of whom is very much alive and very much a part of the making of BIG EYES, Tim Burton returns to the bemused wonder and charm that he demonstrated with "Edward Scissorhands". While in many respects a departure from what we have grown accustomed to in recent years from Tim Burton, in others, BIG EYES feels like the smooth fit of a kidskin glove.

How many of you remember those BIG EYES waif portraits of the 60's that graced everything from posters to book covers to framed wall hangings to knock-off kitschy chatzky items splayed throughout your home? From Woolworth to Wanamaker's they were sold everywhere. Hanging in my own bedroom in my childhood home were the Keane "Big Eyes" waif pictures; purple ballerina wallpaper and Keane pictures. Images indelibly etched in my mind's eye. (Those pictures are still packed away in the house somewhere.) But just who was "Keane"? For decades the public believed it to be a painter named Walter who hailed from the North Beach arts district in San Francisco. But was it really him? Could this fast-talking salesman of a man have the sensitivity and soulfulness to touch the world with those BIG EYES?

When you hear any expression about there being a woman behind every successful man, just think of Margaret Keane. After grabbing her daughter Jane and escaping from a very unhappy first marriage, Margaret, a budding artist, made her way to San Francisco and its well known art faires where she peddled her "big eyes" portraits as well as charging one dollar to draw a charcoal child's portrait on the spot; with a "big eye" touch, of course. Being a single mother was tough going and to make ends meet while trying to fulfill her passion, Margaret also worked painting nursery rhyme characters on cribs at a local furniture factory. But despite being with her daughter and pursuing her dream, Margaret was also lonely, so it comes as no surprise to see her swept off her feet by the charismatic Walter Keane who was also street vending his own oils depicting Parisian street scenes. Although reluctantly admitting he was also a highly successful commercial realtor, Walter Keane hypnotized Margaret with tales of his own days in the European art capitals of the world, while building her own frail confidence with plaudits of her talent and value as an artist.

Entering into a hasty marriage (and obviously seeing her talent), Walter undertakes the job of promoting Margaret's work around North Beach. With no interest by gallery owners in the waifish "big eyes" looks, or the fact the "little hobo kids" paintings were done "by a woman", ever the salesman, Walter hits on a new idea - rent gallery space in the local bar and nightspot, albeit on the walls of the bathroom hallway. It doesn't take long before interest is piqued and pictures start being sold. It also doesn't take long before attention hungry Walter takes credit as being the painter of these works signed "Keane".

Manipulating Margaret into maintaining the facade that he is the artist, the bigger the BIG EYES phenomenon becomes, the more money the paintings and other merchandising ventures make, the more adamant Walter becomes that the secret can never be divulged lest the empire come crashing down. Of course, Walter has deluded himself into believing he is the real artist, eventually likening the works to the "lost children" he saw in post-World War II Europe, gaining him yet even further acclaim. And all the while, Margaret is shrinking into a pitiful and bitter shell of the hopeful, gay, vibrant woman she once was, hiding within the walls of her studio cranking out BIG EYES like a machine. With no friends, no life, and still keeping the truth from her daughter, her only solace is in a series of paintings she undertakes which reflect the conflict and duality of the woman she has become, paintings dismissed by Walter and others as "nothing."

But how long can this deception and fraud on the world, and each other continue? At last finding the strength she once had when she grabbed Jane and ran from her first husband, Margaret runs again; this time to the last place she was truly happy - Hawaii. But for Walter, this isn't the end, prompting revelations and a legal battle that rocked the world.

Thanks to not only knowing the Keane works but my own years in law and given the magnitude of the "arts" issues at play, I was familiar with the Keane story and resulting litigation, so to have that circle of life play out for me through Tim Burton's lens is beyond welcome and enamoring. What could have proven to be drawn out courtroom legalese or a cutesy early life biopic or even an overblown fantastical look at art and intellectual property, authorship and ownership, is none of these, but rather the sum of their parts thanks to the screenwriting team of Scott Alexander and Larry Karaszewski. Known for tackling material with a quirky side to it (think "Ed Wood" or "Man on the Moon"), Alexander and Karaszewski find the humanity and the social commentary within the issues at play, melding them into an interesting and entertaining story with engaging characters and a larger-than-life underlying story on which to build. The script is well balanced, well crafted and well constructed, with fully developed characters and essentially, no loose ends.

Dealing with real life characters for the second time (the first being "Ed Wood"), Burton soars. Each character, and the film as a whole is filled with life, emotion, color. Notable is also how Amy Adams hair color goes from the yellow darker blonde of Margaret's early days with Walter to a lighter, Doris Day 60's more platinum blonde with hair styled off the face, no bangs reflecting the openness and honesty of the truth finally coming out. The depth of metaphor on every level is striking. The simplicity of JC Bond's editing and Burton's unfettered direction lets the film breathe and the performances shine. I never thought I would say the words "beautiful" and "Tim Burton" again in the same sentence, but Burton has told a beautiful story and created a beautiful film.

Cinematographer Bruno Delbonnel delights, creating a lensing palette that is light and bright. Lighting nuance is not only lovely to look at from the dark red bathroom hallway in the nightclub to the beautiful saturated sun, sand and blue sky of Hawaii to the golden sunlight white & gold tones of the hoity toity NYC party (and the lighting captures many of the vintage jewelry designs with a light loving sparkle), but tells its own metaphorically painterly story as do the camera angles. Delbonnel is masterful with a telling emotional lensing that captures the claustrophobia and introversion of Margaret in her studio to the sense of insignificance when captured in wider screen, small and alone against a stone fireplace, while celebrating the exuberant bon vivant nature of Walter. Framing is steady, easy-going. Nothing fancy. There is a simplicity to BIG EYES on every level of production that is so welcoming and inviting.

A visually dependent film, not only for the paintings, but for the period of the 50's and 60's, the period and defining look and mood of BIG EYES is flawless; from the cotton candy colored world of the free-spirited era to Colleen Atwood's clothing (especially the women, not to mention custom made pants for Christoph Waltz that are just delicious) to the stunning production design of Rick Heinrichs. Heinrichs does an amazing job of capturing the bohemian art scene of San Francisco melded with the stuffy hoity toity world of 1964 NYC, the beautiful Woodside California home of the Keanes and then the timeless paradise and relaxing vibrancy of Hawaii. The bar and the brick in San Francisco is rich and textured, perfect complement to the whole concept of art, texture and color and metaphoric for the cloak and dagger gamesmanship of Walter. The gallery of Jason Schwartzman's Ruben is white, bright, open and airy, reflective of Ruben's ideals of no secrets, clean lines, expressionism and truth; a place that can't abide the as yet to be disclosed deceptions of Walter. The Keane home is so beautifully apportioned I expected to see Connie Stevens or Tab Hunter pop in the door at any moment. The entire feel of the era just reels you into the film, just as Keane's "Big Eyes" have reeled in fans of the art for the past 50+ years.

As for the performances, Christoph Waltz is a scene-stealer shyster from start to finish. He rivets you with his interpretation of Walter. The deeper and bigger the lies get, the more grandiose his delusions and correspondingly Waltz' performance is, the more one is rapt with attention, culminating in an explosively hilarious courtroom scene with Waltz playing Walter as both his own attorney and witness. Amy Adams is a pure delight with a range of emotion that is stunning. From the downtrodden, fearful and nervous wife plunged into excessive drinking to the cleansing strength Margaret finds in Hawaii, Adams' performance is refreshing and light, taking us on a powerful emotional journey performed with nuanced skill and heart.

When it comes to supporting players, screen time may be minimal, but the performances are anything but. As newspaper man Dick Nolan, Danny Huston plays him with a fun touch of a reporter who sees himself as a hard news mover and shaker but who is actually relegated to the gossip pages of the paper. As much a puppetmaster as Waltz' Walter, Huston is entertaining throughout.

Terence Stamp is perfectly cast as the icy John Canaday, perfectly capturing the snobby, upper crust, mean-spirited real-life critic of the arts. He is delicious. Another small but fun performance comes courtesy of Jason Schwartzman who adds an aura of faux-upper crust to the bohemian arts district of North Beach as gallery owner Ruben while Jon Polito as nightclub owner Enrico Banducci is just pure fun. Like Stamp's Canaday, Banducci was also a real life player in the Keane story. And I have to say, James Saito had me in stitches several times as the Judge who doesn't tolerate Walter Keane's shenanigans in his courtroom. 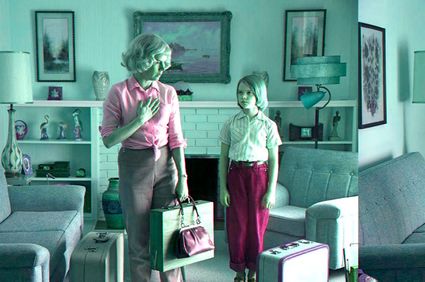 Then there's Danny Elfman's score. Lilting, light, engaging. Even in some of the darker moments of Walter's insanity or Margaret's descent into guilt, Elfman keeps the film from plunging into emotional darkness.

I haven't enjoyed a Tim Burton this much since "Edward Scissorhands". BIG EYES brings big laughs, big charm and big heart for pure enjoyment from beginning to end.

I've got "big love" for BIG EYES. Everyone needs to have an eye on this one!