My New Year's Resolution For The Clippers

I'm Telling You: Learn How To Finish Games 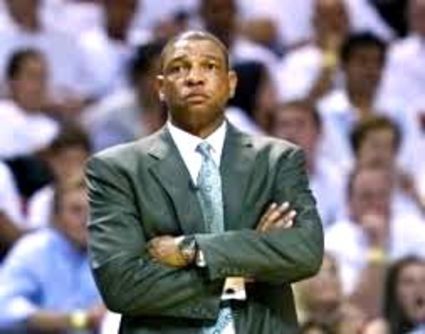 Imagine we could travel back and forth in time and zoom in on the last three years for the Clippers:

To refresh your memory, up until the 2011-12 season the Clippers were a team that for years struggled at the margins/bottom of the league, and didn't pose a real threat on other teams

Then there was a turning point – under the maestro's wand of their coach, Vinny del Negro, the team made it to the playoffs and it seemed like the Clippers has broken the cycle of defeat. Perhaps a new force emerged between the players with a consciousness of winners who run for championship with confidence and the conviction this is what they deserve.

Doc Rivers came on board for 2012-13 and since then the team is target-oriented and determined to win. No doubt. The team's 'mass' is gaining momentum and strength and the goal to bring home the championship seems more achievable than ever. The team's bonding, has grown stronger, the dynamics between the player is getting stronger and it is obvious the Clippers as a team are the rise.

Having said all that and with all my appreciation (love?) and huge support for this team, I have to say I have noticed that the team has to overcome the challenge of closing a game, really hammering it. I don't see enough of a 'killer instinct' in the players.

This season presents a very tough fight in the Western Conference. Fierce battles, harsh competition there's no room for being soft. Without the mental strength required to 'finish the job' it will be extremely difficult to challenge teams like Golden State, San Antonio, Portland and a few others.

If I may draw an analogy from the oriental medicine, Metal is one of the five elements in nature – which in martial arts is believed to be accessed by the sword. The sword represents the sharp, cold and precise move, the ability to cut obstacles and make way to move forward. One right hit and you can ------- remove barriers and run full steam ahead.

That's what I'd like to see in our guys – get on the court on the last quarter calm, confident, sharp and strong like metal and with a clear mindset of finishing the game.

A recent example was their home game against Toronto last Saturday. The game was tied at halftime. The Clippers were OK in the third quarter but ended up with a 102-88 loss.

So that's my New Year's wish for the Clippers in 2015 - May you find the physical, mental and energetic powers to come onto the court on the last quarter and play to win.