THE WORLD MADE STRAIGHT 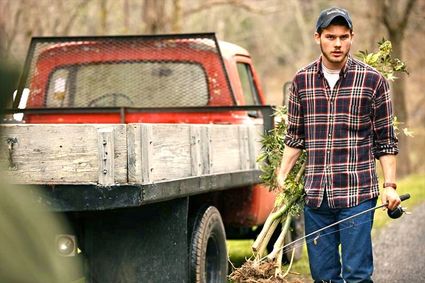 A thoughtful film that places the past and its lingering effects on the present as told through feuding Appalachian families who can't or don't want to move forward in a 1970's backwoods North Carolina, THE WORLD MADE STRAIGHT is a microcosmic microscopic examination of introspection. Adapted from Ron Rash's 2006 novel by writer Shane Danielson and directed by David Burris, THE WORLD MADE STRAIGHT is a slow, methodical, atmospheric burn that celebrates the gravitas of performances from the likes of Jeremy Irvine and Noah Wylie.

17-year old Travis Shelton is a high school drop-out. Fired from his job as a cashier in the local supermarket after giving some food to an elderly man who had no money to pay, Travis is at a loss and unable to find another job. It also forces him to face his worst fear - being the "nothing" that his abusive father always accuses him of, insisting that Travis will never amount to anything.

Sullen, moody, quick tempered and often angry, Travis knows that with no education, even in the backwoods, finding a job is difficult, especially when you dare to dream of wanting more for yourself that what has been your family's lot in life for centuries. A region that is still betwixt and between thanks to the Civil War, even in the 1970's, seems that pot farms and drug dealing is the big moneymaker of the region (you know, a step up from tobacco farming of the 1800's) which sets the stage for a Hatfields & McCoys blood battle between two rival pot-farming families.

One day, Travis stumbles onto some prime marijuana plants which he sees as a possible way out. People pay for pot. He can make money. Turning to his somewhat questionable friend Shane for guidance, Shane encourages him to take the plants for himself and shepherds him to former local schoolteacher-turned-drug dealer, Leonard. Known as "The Professor" not only thanks to his former career as a teacher but because of his insatiable appetite for reading historical journals and treasure hunting Civil War relics, Leonard agrees to buy the stolen plants but warns Travis to not pull this kind of stunt again.

Ignoring Leonard, Travis returns to the scene of the crime and steals even more crop, this time from the obviously unstable and extremely volatile hillbilly Carlton Toomey, and son Marcus. As we all know, karma can be a bear, and it is for Travis who manages to step right into a bear trap, literally. Viewing this as a possible warning from "the Good Book", Toomey allows Travis to live and even tends his wounds, but lets him off with a warning about any future trespassing or theft as he might not be so kind to Travis if he's caught again.

With injuries so severe to require hospitalization, Travis catches the eye of student nurse, Lori. Developing somewhat of a relationship, at least a friendship, Travis starts to believe there could be more for him in this world. On his release from the hospital, he is turned out by his father and not allowed to return him. With nowhere to go, Travis lands on the doorsteps of Leonard's trailer, who takes the promising young man under his wing, encouraging him and even helping him to study for his GED.

It doesn't take long before Travis becomes inspired by history as he studies Leonard's Civil War artifacts and becomes engrossed in Leonard's precious journals; journals that detail the events of a massacre, the Shelton Laurel Massacre, in which some of Travis' ancestors were executed.

Trying to wrap his head around and come to terms with not just history, but his own familial history, and that of others in the community, Travis battles inner demons while also becoming a pawn in the ongoing feud between rival drug-dealers Carlton Toomey and Leonard.

I am beyond impressed with Jeremy Irvine's performance. As Travis, Irvine lets us see real growth and an emotional arc within the character, perfectly conveying the moral confliction with Travis. Irvine has a great ability of speaking with his eyes and adding some physical nuance that plays to the conflicted emotions of Travis - family or girl or education or get out of town or fear of family or moving on. Very nuanced and emotionally textured.

Given his role in the "Librarian" telemovies the past several years and now leading the cast of the tv series of the same name, Noah Wylie is perfectly cast as former schoolteacher Leonard. Always thoughtful, pragmatic, right down to discussions on pot use and farming, Wylie embodies the intellect and cerebral nature of Leonard, not to mention the constant desire of learning, bringing a dignity and pride to Leonard that rises above past sorrows. Maintaining a quiet, controlled, relatively soft-spoken demeanor, Wylie perfectly captures the idea of "calm before the storm" which makes even a slight elevation of or inflection of Leonard's voice something impactful and powerful.

As Leonard's drugged-out train wreck of a girlfriend Dena, Minka Kelly more than delivers. A true bit of lightness comes courtesy of Adelaide Clemens who bears more than a strong resemblance to Michelle Williams. The petite, blonde, pretty, genteel sweetness that Clemens brings to Lori is refreshing, metaphorically serving as a guiding light for Travis; Lori is a spot of brightness in this corrupt and angry community. Kudos to director Burris and cinematographer Tim Orr for the lightness with which they lens Clemens, giving her at times an almost angelic halo effect of backlight. Truly beautiful. Notable is that Clemens and Irvine have an engaging chemistry that embraces the hesitancy of a first love and the fear of the future.

Particularly effective casting, however, comes with the "hillbilly" families and stereotypical Appalachian moonshining types. Steve Earle is effectively creepy as the sociopathic, Bible thumping, drug dealer and farmer, Carlton Toomey. Earle makes Carlton someone truly to be feared. As Wesley, Colin Dennard adds some interest to the character as does Marcus Hester with Hubert Toomey. Each adds great character and period texture to the story and film as a whole. Not to be overlooked is Haley Joel Osment who pops in for a few scenes as Travis' friend Shane. It's obvious Osment is having too much fun playing a bad ass good ol' boy!

Ashamed to admit I had never read Ron Rash's novel before now, but thanks to Shane Danielsen's adapted screenplay, I will now. The historical background of the story and how the deeds and sins of the past never leave certain regions or familial lineages is fascinating and to express that by focusing on a coming of age, morally conflicted teen is a compelling entre. Danielsen's script envelops us in a believable world that still exists today. Even now, watching THE WORLD MADE STRAIGHT, there is a sense of time standing still that the story and the characters convey.

Directed by David Burris, THE WORLD MADE STRAIGHT is very much a "pay attention film"; not just for the dense material of the familial and cultural dynamic, but for the dialogue and accents employed by the actors. Noah Wylie in particular pulls off a deeper slow resonant tone by tilting his chin down to his chest and as a result, you really had to pay attention to the dialogue - especially that of Leonard as it is key to Travis' growth as well as providing the expository backstory. A wonderful part of the film's construct is the voice-over narrative that Leonard imparts from the historical books and diaries. Most appreciated about that that is the context of those voice-over narratives in that while speaking about a moment in the past, is as equally applicable to the present or, in the case of THE WORLD MADE STRAIGHT, the 70's.

Flashbacks to fill in the gaps on Leonard's backstory are adequately presented, albeit come of the weaker links in the dramatic scheme. 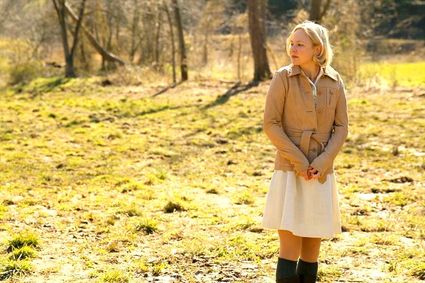 Although there is great predictability with certain elements of the story and the film as a whole, they are well executed and lensed thanks in large part to the beautiful widescreen lensing of Tim Orr. As comes as no surprise considering what Orr did with films like "Prince Avalanche" and "Joe" with the landscape and forestry, and then the visual and metaphoric depth that he gives to character driven pieces like "Salvation Boulevard", "Choke" and "Snow Angels", Orr shoots widescreen but frames individuals in a mid-shot, and then punctuates the film with impactful well placed close-ups that just pack a real emotional punch. Visual balance comes with some wide shots that metaphorically tap into the darkness of the woods, history and secrets. For a first time feature director like Burris, bringing on a storytelling cinematographer like Orr was a very smart move indeed.

But icing on the cake is the perfection of the bluegrass infused score melding the sounds of the Civil War South with the backwoods of the Appalachias as the final touch of authenticity and emotion. Standout are some vocals by singer-songwriter Steve Earle which just add another layer to his performance as Carlton Toomey.

Written by Shan Danielsen based on the novel by Ron Rash