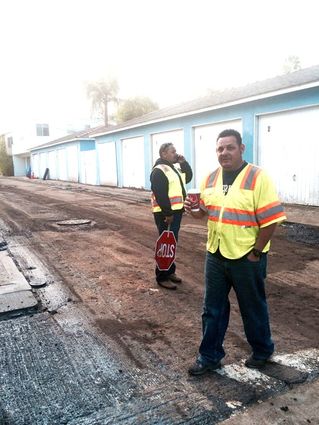 Brian from All American Asphalt, reports that SantaMonica is paying his company about $20,000 a block to do six alleys in Santa Monica He says they're adjusting the manhole covers today, and they will repave it tomorrow. "We hate doing alleys," he says "they're very difficult." An alley has to be repaved when the ride becomes too bumpy for commuters to use the alley. Many alleys in Santa Monica are in a state of disrepair and the city is slowly repaving them. This particular alley is located between 9th and 10th Street, and between Michigan and Pico.