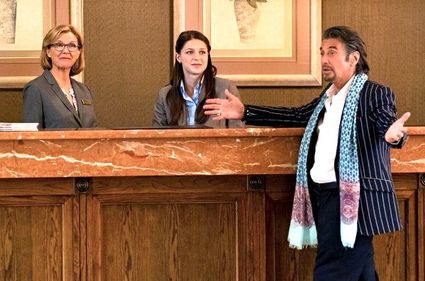 I don't know if it's because I'm getting older or Al Pacino us just getting better, but between his recent tour de force in "The Humbling" and now DANNY COLLINS, I have fallen in love with him as an actor. The nuance that he brings is electrifying and emotionally enticing and fulfilling and never moreso than as DANNY COLLINS.

Written and directed by Dan Fogelman, DANNY COLLINS is, as the screen credits playfully note, "Kind of based on a true story a little bit." That true story is a real letter sent by John Lennon to a young British musician named Steve Tilston, following Lennon's reading of an interview Tilston gave about the downside of fame and fortune. The letter is the core truth of the story and the film with everything growing out of that being fictional and entertaining fancy; and it's a pure joy!

Danny Collins is the life of the party. An aging rocker with a money-making career stemming from essentially his one-hit-wonder "Baby Doll", Danny has seen it all, done it all, spent it all. He's got money in the bank, cocaine up his nose, 100 year old Scotch in a Waterford glass, a 20 year old "fantastic plastic" money grubber on his arm and a "glass house" exposing all for the world to see. And he's miserable. Sick of it all. And then his lifelong manager - and only real friend - Frank Grubman, drops a bombshell.

As a special gift in celebration of a Danny's milestone 70th birthday, Frank gives him a framed letter from John Lennon; a letter written from Lennon to Danny. Written in 1971, the letter went undelivered or got lost in the mail or intercepted, but never made it to Danny until now thanks to Frank finding it in the possession of a collector. Watching him reel from the surrealism of the gift, Danny takes Lennon's words to heart as he reads over and over and over again Lennon's invitation to discuss career choices with him, closing the letter with his home phone number and a request to call. And then the wheels start turning. What if? What if Danny had spoken with Lennon in 1971? Would his life have turned out differently? Would he have foregone the fame and fortune and stayed true to his heart writing real music, real songs, of substance and value, songs that Lennon would embrace?

And so, much to Franks's chagrin, Danny walks away. Walks away from it all. Determined to give it a go in this third act of his life, Danny heads to a podunk town in New Jersey and checks into a run of the mill Hilton. But why New Jersey? Seems that Danny has a son. Tommy Donnelly. The product of a decades old one night stand, Tom has never met Danny although he knows who he is - and he hates him believing that Danny deserted them. With his mother passed and himself estranged from rock star dad, Tom has made a wonderful suburban life for himself with a loving wife Samantha and over-energetic ADHD daughter, Hope, with another child on the way. Although money is tight thanks to the economy and Tom's limited work in construction, the family is filled with love and laughter.

Desperately trying to defeat his demons and turn over that new leaf, Danny wants to connect with Tom and be the father and grandfather that he never was but now thinks he wants to be. Tom wants no part of it. No part of the money. No part of holidays and birthdays. No part of Danny. Danny, however, is undeterred in his efforts and sees a way into his son's life - through Hope. But will that open the door enough for a reconciliation?

And it's not only Tom whom Danny is trying to connect with. There's Mary, manager of the Hilton. Charming yet standoffish, Mary will not buy into any of Danny's shenanigans. But after a night of drinking at the hotel bar, a cat and mouse game between the two ensues as Danny tries to earn a "yes" to a dinner invitation. Never having been with a mature woman closer to his age, the challenge Mary presents only provides that much more charm.

But cancelling a nationwide tour has its price; especially with the money Danny is spending on Tom's family (including a special school for Hope), not to mention the bimbette back draining his accounts dry with her spending habits on herself and her boy toy gardener. And then Frank delivers the bad news. Danny is going broke. He needs to tour. He needs the cash. He needs to change his spending habits and lifestyle. Can a guy like Danny resurrect and reconcile his life and his relationships or will fame grab him by the throat and not let go, yet again?

As aging rocker Danny Collins, Al Pacino is a breathe of fresh air. Never known for his comedic skills or heart-tugging sentimentality, he soars. His comedic timing is flawless, enhanced by a hapless "who me?" look on his face. Perfecting the effortless showmanship and essence of an aging star, be he rock music or otherwise, Pacino brings to life that sense of everyone being an audience and he must entertain. There is a duality of life/rebirth and death so metaphorically told not only within the story construct, but in Pacino's performance one is taken by surprise when the subtextural layers unfold. On one hand we see Danny's school boy innocent puppy dog adoration of Annette Bening's Mary, who is equally giggly and charming like a smitten schoolgirl but with a knowing maturity and practicality that kicks in when necessary. But then Pacino adds a knowing twinkle to his eye and a spring to his step that is mischievous delight. On the slip side, he makes Danny observant, inquisitive and conscientious when it involves Hope. He makes Danny a man reborn or attempting redemption, and noticeably, thanks to Fogelman's cinematic construct, without really facing his demons and hitting rock bottom. Attempts and efforts are born from desire, spurred on by that omnipresent framed Lennon letter. And the little touches Pacino brings to the role as a "new" father and grandfather? Your heart swells watching the character grow and develop relationships.

Each of those relationships are all equally fabulous and effective starting with Pacino's dynamic with Bening. Dazzling emotion on so many levels. There is an affable comfort between them that grows and just feels right. You love Danny and Mary together because of their youthful elan, so much so, in fact, you want to see more of them. Perhaps in "Danny Collins: The Final Act" and pick up where we leave them here.

As Tom, Bobby Cannavale has never been better. He brings a depth and texture to the role that is grounded, real and resonant. Watching the character development of Tom through Cannavale's performance and the relationship with Pacino's Danny just pulls at the heartstrings. Masterful on both parts. Perfect casting also comes for Samantha in the form of Jennifer Garner allowing her natural maternal instinct to take hold and resonate truth.

And then there's Christopher Plummer. Witty, sly, wry and salt of the earth dedication and faked crotchety loyalty as Frank. Delicious! Of course, how can you not love 85-year old Plummer in tight skinny jeans and a crushed velvet blazer. A key scene for Plummer involving Frank's delivery of a piano to Tom's house is not only funny but has a poignancy that in Plummer's hands brings a tear to the eye.

Be on the lookout for some great small parts from the likes of Josh Peck whose brings an infectious level of fanboy driven excitement to the role of Hilton valet Nicky. Scene stealing abounds with young Giselle Eisenberg who vies for your attention as Hope, particularly when going toe-to-toe with Pacino.

I have long admired writer/director Dan Fogelman for his scripting and ability to capture the truth of life and people with all the warts and beauty, while adding a lightness to the telling. His humor is smart and sweet. His drama, truthful and resonant. The blend is perfection. And although formulaic on many levels, he does just that with DANNY COLLINS and in so doing, engages the audience. He allows the performances to shine and naturally create and capture the textures of life and the heart. But then he takes everything a step further with directing - visuals tell another layer of the story and round out a fully complimentary tonal bandwidth.

Steve Yeldin's cinematography and framing and lensing is light and upbeat, calling on the warmth of some golden hues while contrasting with natural and stark white light on certain emotional scenarios. The claustrophobic feel of a closed life, and empty family life is captured with small impersonal hotel rooms and thanks to production design, contrasted with the clutter and lived in decor and warmth of Tom's home. 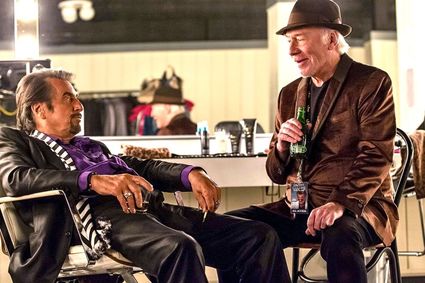 But the music! Oh, the music! Wonderful! Of course, how can it not be with nine Lennon tracks plus the pop-fueled ditty "Baby Doll" which Pacino actually sings. Folks, lemme tell ya, he is terrific. Vocally, you hear the years of hard living and age, but the vocals are solid. And I gottta say, Pacino struts his stuff as good as Steven Tyler or Mick Jagger in their prime! So lovely, is a key ballad that Danny spends the film trying to write, which Pacino performs progressions of with a tender purity.

Written and Directed by Dan Fogelman