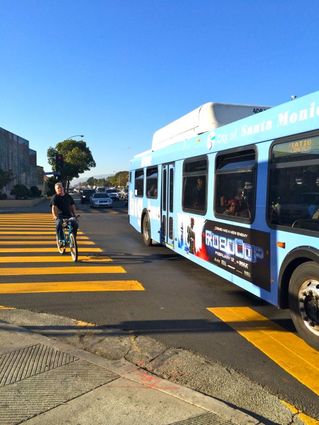 To The Santa Monica Observer:

The Santa Monica City Council is scheduled to meet on Tuesday to discuss issues related to the Big Blue Bus. The proposed massive shifting of long-existing bus routes to "service" the Expo Line is on the agenda, and no doubt the continuing controversy over the Bus Stop "Improvement" Project being rammed through by the Big Blue Bus will be discussed as well.

No doubt the latter is well known to you and all other media in Santa Monica, with the BBB management spending 7 million dollars in public money (funds that were earmarked to improve mass transit infrastructure) to actually make the BBB bus stops in Santa Monica less hospitable to the homeless, and in so doing less functional for the ridership. (A secondary goal was to make the bus stops more "artsy". The end result was a 7 million dollar art deco project.)

The one point that unites these two-prima facie distinct-issues, i.e. the mass re-working of the bus routes and the decision by fiat to replace what were very comfortable and functional benches with art deco lily pads, is that both perfectly exemplify what happens when a governmental entity simply decides to act on an idea without really running it by the public.

With regard to the bus routes, the view of most riders with whom I have spoken is that there is no need to make any change to the BBB routes prior to the arrival of the Expo line. Let's let it come in, see what traffic patterns result, and then make changes if necessary. When an agency, however, rushes into the implementation of a plan that hasn't been vetted by the riding public, the result is the incredible cluster that has occurred over the past year as evidenced by the massive public outcry against replacing functional and comfortable benches with the lily pad seating.

The Big Blue Bus tried to back out of this ditch not by doing the logical thing, i.e. replacing the benches, but by offering two new seat designs, and then asking the public via a survey to choose between the two. A Freedom of Information Act request was made to release all the responses, and they were scathing. Even though bringing back the old benches wasn't listed as an option, it kept recurring in the responses that were sent in from a frustrated bus ridership. I have attached a copy of all the responses to this email.

The point is, making these changes prior to the actual arrival of the Expo line is setting us up for a similar experience, albeit on a much grander scale.

It may well be that your newspaper already has these comments, so if that's the case, my apologies for the unnecessary email. But if not, then I think these comments will provide amble documentation to the fact that the Big Blue Bus is radically, tragically out of touch with the public it claims to serve. No doubt this fact will come up in Tuesday's City Council meeting.