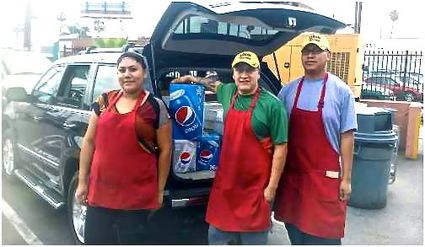 This week Tito's Tacos served up a lunchtime spread for around 140 U.S. Military Veterans who unselfishly served the United States in a wide variety of conflicts around the World and who are currently in the recovery process, in hopes of returning soon to mainstream society once their physical and mental issues are properly attended to at the West Los Angeles Veteran Administration Hospital.

The Tito's Tacos donated menu at this yearly event included 250 Tito's Tacos with Cheese, 150 Beef, Bean & Cheese Burritos, Chips & Salsa and an assortment of PepsiCo products to help make their midday dining experience a fulfilling one.

In fact, one of the younger Veterans was heard quoting from the Tito's Tacos Jingle to a fellow patient saying "Hey, do you know what the only thing better than a Tito's Tacos is?" And, when his companion didn't know the answer offhand, the Veteran then said "It's Two, Dude!"

Tito's Tacos looks forward to providing its award-winning cuisine to a whole new batch of Veteran Patients next year and encourages others in the community to do whatever you can do to help our often times forgotten Heroes.