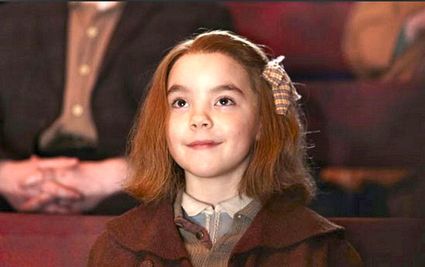 Christina Noble is a name many may not know but after seeing NOBLE, thanks to not only the subject of the film, but the well crafted storytelling of writer/director Stephen Bradley and indelible life-affirming performances by Dierdre O'Kane, Sarah Greene and Gloria Cramer Curtis as Christina Noble at various points in time, you will not only want to know the name, but the woman. An amazing woman. An inspiring story. A powerful and moving film.

Christina Noble was born in the slums of Dublin, Ireland in 1944. Her father was a drunk. Christina and her three siblings were raised by their mother until her passing when Christina was only 10-years old, leaving the children homeless and alone. Despite the hardships and poverty, Christina was a happy child, an optimist with a sunny disposition that matched that of her idol, Doris Day. With a voice like an angel, Christina would sing on the streets or in pubs, trying to make money to care for herself and brothers. And she would talk to God; actually question, berate and barter with him like a child negotiating for marbles in the schoolyard as she looked for answers for the heartache and hardships of her still young life.

Despite her best 10-year old efforts, the children were taken by the State, separated and sent to different orphanages. Christina was housed in an institution in West Ireland for four years and led to believe that her siblings were dead. She eventually escaped from the orphanage, living in a hole in the ground of Phoenix Park in Dublin. During this time she learned that her brother was alive. She was soon found and taken back to the institution. But when she turned 18, Christina ran away for good, heading to England to be with her brother. In England she met and married her husband and gave birth to three children.

What should have been a happy time for Christina with a long-desired hearth and home, life was still hard and happiness eluded her. Then, in 1971, at the height of the war in Vietnam, she had a dream; a dream about naked Vietnamese children running down a dirt road trying to escape napalm bombing. That dream began to haunt her as she relived her own childhood, unable to escape the memories of destitution, poverty, filth, homelessness, hunger and loneliness. But being the ever upbeat and perky Christina, she resolved to do something for the children in Vietnam.

It took 20 years, but in 1989, Christina set foot in on Vietnamese soil to fulfill what would become her cathartic destiny - the Christina Noble Foundation. Based in Ho Chi Minh City (the former Saigon), in the 25+ years since Christina Noble first began her crusade, the Foundation programs have expanded throughout Vietnam while Noble herself has been awarded the OBE by Queen Elizabeth.

This is her story.

I had no idea of Christina Noble's story when I sat down to screen the film. I went into the movie blind and came out with eyes and heart wide open. At what should be the film's darkest moments there is always positivity, hopefulness, inner strength and resilience; of course, aided by perpetually sunny Doris Day moments! NOBLE is a moving and inspiring story, a testament to an incredible woman and her inner strength and faith. So artfully constructed by Stephen Bradley, we may feel sadness or sorrow, but never real abysmal horror so as to make one turn away. The story stays focused on Christina and her personal "whys" and "hows" as opposed to straying into the politics of the day.

Crucial to the story success of NOBLE is the performance and casting of Christina Noble herself. Here, Christina Noble is portrayed seamlessly by three different actresses at various points in Noble's life. So perfectly cast are these three women in look and in spirit that there is never a doubt this is the same woman over the course of 40 years.

Gloria Cramer Curtis is the new young Tina Majorino! As 10-year old Christina, she is adorable. But what spunk, determination, conviction and pure JOY she elicits. And what a voice! Mirroring the essence that Curtis brings to the screen, and equally strong, is Sarah Greene as the teenaged Christina. But the icing on the cake is veteran actress Dierdre O'Kane who initially brought the project to Bradley. Perfection. Full of Irish fight and piss and vinegar. There is a grit, determination and drive that is almost enviable yet there is a comfortableness in her own skin and with her past. O'Kane mesmerizes with powerful truth in performance and character.

Christina Noble didn't achieve her dream of aiding the children of Vietnam alone. Along the way, there were some significant individuals who became integral to the journey. One such individual/amalgamation thereof, is portrayed by Brendan Coyle. Coyle is a delight as staid businessman Gerry Shaw and has such chemistry with O'Kane that you hope for happy romantic sparks to fly. You really want to see the two of them end up together as a couple, which they do in a business sense, but there is a deeper connection between them thanks to the layered performances that draws one deeper into the story and their relationship.

For every good guy, there has to be a bad guy and in NOBLE that comes from Mark Huberman. Easily adding an oily slickness to David Somers, Huberman walks a fine line of deceit while emitting a sense of unsettling concern, prompting heart-stopping moments akin to waiting-for-the-shoe-to-drop with revelations. And when that shoe drops, boy does it drop. Explosive.

Captivating is Nhu Quynh Nguyen. As Madame Linh, a Vietnamese woman who reached out her hand to Christina both in friendship and in need of help for her small facility/clinic in which she tried to help the homeless children, Nguyen brings a regal pride but then adds beautifully telling nuance with a slight stoop to her shoulders as if carrying the weight of the world. It's a powerful touch that speaks volumes as to the strength of character of Madame Linh. And again, the relationship and chemistry between O'Kane and Nguyen is resonant and believable. Very strong female relationships in NOBLE which celebrate the maternal strength in the world, and the weight borne by the women when it comes to protection and caring of children.

Cute as a button is a young local actor who plays a Vietnamese boy named "Lam" who will break your heart. Focusing screen time on him with O'Kane gives a face to her Noble's mission and tugs at the heartstrings. You can't help but want to wrap your arms around him and protect him.

Written and directed by Stephen Bradley, the real beauty of NOBLE, and what sets it apart from being a Hallmark or Lifetime tv movie, is Bradley's construct. A non-linear weaving back and forth between past and "present 1989" and only revealing bits and pieces of the timeline - like breadcrumbs - and the corresponding temporal nexus keeps one engaged, interested and above all, curious, as we learn why and how life took Christina to her present state. Bradley's vision is clear, concise and he has found that sweet spot between emotion, character and visuals that come together perfectly. While I suspect that the real Christina Noble endured even more hardships and hell than what we see on screen, Bradley smartly doesn't mire us down in sorrow and "woe is me" catastrophes and horrors. He gives us just enough to tell the story and create the connective tissue for the non-linear construct so that we understand Christina's motivations and drive.

Retaining all the elements of Christina's childhood, the exchanges of Christina talking to God add a touch of humor infused with the childlike resolute conviction, something which each of the three actresses bring to their "conversations" with Him, with Christina always rationalizing on her own terms that bad things happening better mean something really really good later on in life. You can see a child bargaining with God like that and here it becomes a touchstone and hallmark of the character. The purity, innocence and blind faith captured in a 10-year old Tina becomes the core essence (along with perky Doris Day) of who Christina is as an adult, something which the 17-year old and 40 year old performances capture and retain. A consistency of generational performances that is rare to see. 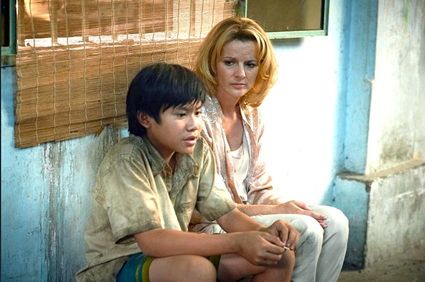 Adding to the strength of Noble's true story and Bradley's script is the visual work of cinematographer Trevor Forrest making NOBLE as much a visual storytelling as a performance driven piece. Shooting on 35mm, Forrest and Bradley beautifully capture the cinematic texture and feel of the eras, adding tacit historical depth to the film as a whole. Saturated night visuals tacitly intensify the harrowing nature of Saigon/Ho Chi Minh City while the hand held steadi-cam in daylight has a light, natural tone and ease, fueled by natural light that allows the color - those light turquoise blues, slips of red and pink - to speak to the resilient and vibrant nature of the people despite the poverty.

Hope, determination, overcoming adversity. One woman or person can make a difference. That difference is NOBLE. A noble woman. A noble journey. A noble film.

Written and Directed by Stephen Bradley