Let's All Go To The Movies. . . At The Arclight Culver City!

--- and coming to Santa Monica Place in November! -- 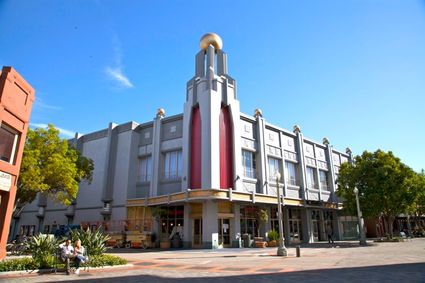 As you stroll through Downtown Culver City you might notice a new face on the block - ArcLight Cinemas. While maybe not a completely new face, it's definitely a 21st century upgrade. As related by Gretchen McCourt, Executive Vice President & Chief Content Officer of ArcLight Cinemas, "We've been operating here in Culver City as Pacific Theatres for a number of years and with the transformation that Culver City has made with the restaurants, with the nightlife, with the activities, it was time for the theatre to change with that." And change it has.

Despite a little opening day hiccup and construction delay, ArcLight Cinemas is now fully operational, ready to take you on an unforgettable cinematic journey and movie-going experience. Now celebrating the 13th anniversary of the ArcLight brand, the company's focus was born out of the idea that "there had to be something better than waiting in lines, saving seats, and experiencing a concession stand." According to Michael Blazer, General Manager of ArcLight Culver City, "What we're trying to create is for [the guest] to come in and have a hassle-free experience, one that is seamless, easy, where the guest feels like they're in complete control."

Boasting 12 screens with seating that ranges from 80 to 250 guests, "all of the sound and the technology that we have in the booth is at the highest standard." Blazer is also quick to note that "We have very thorough walk-throughs every single day to make sure that we're emitting the best picture and sound quality that goes on the screens."

Cinephiles will delight with the technical specs of sound and projection at Culver City Arclight. All 12 theatres are equipped with 5.1 Dolby CP650 Processors for optimum sound. Theatres 1, 3, 5, 6, 7, 9, 10, 11 and 12 use Sony SRX-320 DP projection and can play 4K. Theatres 4 and 8 are equipped with Sony SRX-320 DP and RealD 3D/ Silver Screens which means you will find your 3D screenings will be in one of these two theatres. However, because of the double barrel lens installed for RealD 3D, no 4K screenings will be in these two theatres. Real D 3D films can also be shown in Theatre 2 which is self-described by ArcLight as "an old Chicken Little install" with series 1 NEC 2500-2K projection with silver screen.

Complementing the overall technical aspects of the theatre, Blazer explains the ArcLight design aesthetic of "black box auditoriums." "The goal is to admit the least amount of light so that the picture on the screen is as bright as possible. So we do that with the aesthetics, either purple or blue, as well as the seats, so that way you can up the reflection of the screen. . .We are even very mindful of the type of exit signs that we use so it's still safe but it doesn't need to be that bright during the movie."

Notable within the ArcLight brand is the depth and diversity of its programming, something which Blazer personally appreciates. "One of the things that makes [ArcLight] unique is the fact that you could watch a blockbuster film like "Fast & Furious 7". Then you could also come the same night or same week and watch "ArcLight Presents" with something like "2001: A Space Odyssey" or you could join us for a double feature of "Avengers". It's a one stop, cater to all the demand that's in the market." For McCourt, "One of the things about ArcLight is we play retrospective films every week and often times those films are in 35mm." The Heart of Screenland will be enjoying those weekly trips down memory lane in Theatre 3 which is equipped to screen films in 35mm.

Making the movie-going experience at ArcLight Culver City one of luxury starts with the "Departure Board" in the lobby which Blazer likens to "going on a cinematic journey. . .the same experience you would get at a train station." Incorporating the latest technology, ArcLight Culver City now provides a "wireless lobby" which means that after a guest selects the film they want to see, crew members will be "floating" in the lobby and able to service guests needs, preventing lines and waiting. Tickets can also be purchased in advance online, free of any service charges at http://www.arclightcinemas.com. Similarly, tickets are available on the ArcLight mobile website or app. A high point for Blazer and McCourt is that "all of the seats are reserved as well, so when you come into the theatre you basically have your seat there waiting for you. . . You can just come a minute before the film starts and be able to find your seat right away."

ArcLight is also "an advertising free environment. There is no screen advertising, no advertising in the lobby. McCourt is proud of the ArcLight policy. "And we show three trailers and the film starts very very close, maybe five or six minutes, past the advertised showtime."

For Steven Ramskill, Senior Manager of Theater Operations at ArcLight Culver City, the "Easter Egg" of the ArcLight experience is dining and concession. Along with the usual popcorn, candy, hot dogs, beverages and the made fresh daily ArcLight caramel corn, mix and mingle dining in the lobby adds another layer to the movie-going experience. With a monthly rotating draft beer selection (including local craft beers), full bar and fine wines, a "Small Bites & Shared Plates" plus dessert menu with selections like Ahi Tuna Poke, Popcorn Chicken, Meet & Cheese Board and even chocolate lava cake, ArcLight has something for everyone's taste.

With the last word, Gretchen McCourt's excitement for ArcLight Culver City is palpable. "With the reserved seating, with the no lines in the lobby, with the gourmet food, with a distraction free environment, we feel like our transformation is now catching up with what has happened in Culver City to make it such a vibrant vibrant place."