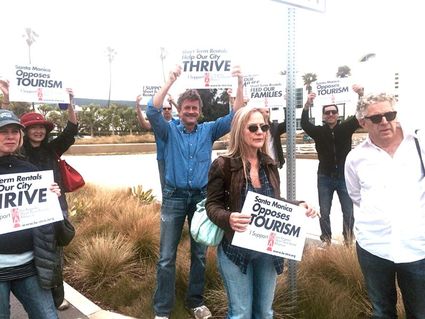 As cities across Southern California wrestle with how best to regulate the booming short-term rental industry, Santa Monica is poised to take the hardest line yet.

The SM City Council is considering a measure that would ban most of the vacation rentals listed on Airbnb and websites like it, and set up strict new regulations for those who want to rent out space in their homes.

The use of short-term rentals has exploded in recent years, especially in tourist-friendly spots such as Santa Monica, in large part from the growth of websites such as Airbnb, which allows people to rent space in their homes, or an entire house, to visitors.

Although advocates say the sites help hosts earn extra cash and provide travelers and tourists with an alternative to traditional hotels, critics say many Airbnb units are operated like full-time hotels, and complaints have grown about noise, strangers and even their effect on rents.

In most of Santa Monica, rentals of less than 30 days have long been technically illegal, said Salvador Valles, the city's acting chief administrative officer for Planning and Community Development. But enforcement is sparse and city regulations have struggled to keep pace with the changing technology.

"We've been concerned for some time, and we know enforcement is difficult," Valles said. "The council seems to think it's time to hit the brakes."

Santa Monica is not the only local city wrestling with the issue. This year, West Hollywood reaffirmed its ban on short-term rentals. Malibu last month reached an agreement with Airbnb to collect taxes on rentals there. Los Angeles city officials have been studying short-term rental regulations for months, though no specific proposals have yet been made. San Francisco and Portland, Ore., among other large cities, have also enacted new rules, to mixed effects.

In Santa Monica, council members two weeks ago asked city staff to propose new regulations. Those will be debated Tuesday evening and could get a final vote as soon as next month.

The proposal would explicitly prohibit vacation rentals where the primary occupant of a home or apartment is not present; that covers about 1,400 of the 1,700 units in the city currently advertised on major short-term rental websites, Valles said.

It would allow so-called home-sharing, in which the host stays in the house and rents out a spare bedroom, couch space or other quarters, but only if the occupant filed for a city business license and pays Santa Monica's 14% hotel tax. And it would require rental sites such as Airbnb and VRBO to report to the city who is hosting, where and how much they charge.

"We've come up with a strategy that we think will help us to address the issues more directly," Valles said.

Santa Monica's move comes in the wake of a report issued last month by labor-backed research group Los Angeles Alliance for a New Economy, which suggested that thousands of apartments are being taken off the normal rental market across the Southland and instead being rented to tourists a few nights at a time. That, the group said, is exacerbating a housing shortage that's especially acute in high-demand, tourist-friendly areas such as Santa Monica.

The city has already seen rents soar in recent years, in part from an influx of well-paid tech industry workers. Losing more units - some of which are covered by rent control - risks making Santa Monica an even harder place to afford, said Denny Zane, co-chair of Santa Monicans for Renters' Rights.

"We welcome visitors, but we shouldn't be losing our rental housing to them," he said. "This is the latest in a series of threats to our existing rental market. We think local government has to take it very seriously."

Airbnb had no Santa Monica-specific data but has released figures in the past suggesting that the number of units listed full-time on the site in Southern California is quite small. And, it notes, many hosts rent out a spare bedroom or other space in their home to help pay the rent and stay in expensive markets like Santa Monica.

The company had little comment on the proposed rules, but a spokeswoman said Airbnb would notify its local hosts about Tuesday's council meeting and said it expected some hosts to turn up to comment.

Meanwhile, the company, which emphasizes home-sharing in its marketing, has taken some steps lately to push back against operators of multiple vacation rentals, booting several big Los Angeles-area vacation rental firms from its site last month.

But spokeswoman Alison Schumer said Airbnb is strongly opposed to a part of the measure that would require short-term rental websites to submit to the city data on hosts, stays and pricing. The company is fighting similar statewide legislation in Sacramento and has pushed back against similar proposals elsewhere, citing the privacy of hosts.

"We are deeply concerned about proposals that fundamentally alter the online privacy protections Santa Monica residents have come to expect," Schumer said. "Santa Monica should adopt clear, fair rules that enable residents to share their homes and we look forward to working with lawmakers in Santa Monica."