"How To Be A Rock Critic" Opens At Douglas 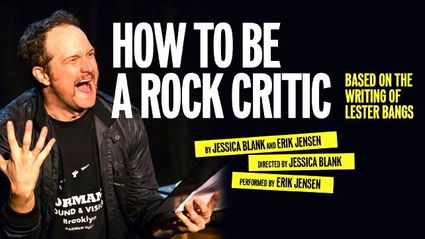 The world premiere production of "How to be a Rock Critic" opened Wednesday, June 17 at 8 p.m. and continues through June 28 in a limited engagement of 12 performances at the Center Theatre Group/Kirk Douglas Theatre in Culver City.

Based on the writing of Lester Bangs, the rock critic who reached iconic status in the 1970s with his passionate, intellectually honest writing, "How to be a Rock Critic" will be performed in the theatre's rehearsal space, [email protected] Presented as part of DouglasPlus, it is a co-production with South Coast Repertory.

Written by Jessica Blank and Erik Jensen, performed by Jensen and directed by Blank, "How to be a Rock Critic" follows the brief and outsized life of Bangs, who wrote about the The Clash, Bob Marley, Lou Reed, Blondie, Iggy Pop, The Ramones and many more, in publications such as Rolling Stone, Creem, The Village Voice and Playboy.

His writing was wild, funny, original, unpredictable and dedicated to stripping away the marketing jargon surrounding the artists.

Jessica Blank and Erik Jensen are actors, writers and directors, and together have authored "The Exonerated," a play based on interviews with over 40 wrongfully convicted death row inmates in the United States (Lortel, Outer Critics Circle, Drama Desk and Ovation Awards, among others).

Jessica co-wrote the play "Liberty City" with April Yvette (Lucille Lortel, Drama Desk and Outer Critics Circle Awards), and has written three books – "Almost Home," "Karma for Beginners" and a new one coming out this year.

Erik's T.V. acting credits include leads in the NBC pilot "The Frontier," the Fox pilot "Virtuality," the TNT pilot "The Dark" and "The Bronx Is Burning," as well as work on "NCIS: LA," "CSI," "Law & Order: CI" and many more.

"How to be a Rock Critic" is a CTG completion commission. The production and the commission are generously funded by the Andrew W. Mellon Foundation.