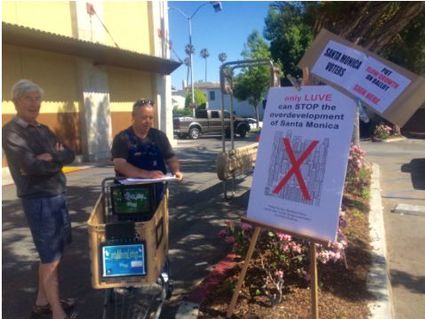 Solicitor Daniel Vieques gathers signatures for the land use voter empowerment initiative in front of Vons. It would require a vote on any project exceeding 32 feet in height

For the last seven years, the City of Santa Monica has struggled to come up with a downtown plan. The problem is, the City's residents are in open revolt against a City Staff they see as rubber-stamping numbers huge projects for years. 25 workshops have been held. Numerous discussions and formal hearings have been held. Yet the city's residents are lukewarm at best, to greatly raising the amount of traffic and people in downtown. Truly, what is wrong with these citizens?

From City Hall's perspective; "we've tried. We've really really tried! to take residents opinions into consideration. Once called "The Specific Plan," the renamed "Downtown Community Plan" (isn't that nice? It's all about community!) will go to City council next Spring. Rather than this summer. Before the election.

"This is a key planning document and we have to get it right," said City Manager Rick Cole. "From the outset, I've emphasized the importance of reaching consensus to guide Downtown development in the years ahead. The initial feedback from both the Planning Commission and community voices underscores the importance of thoroughly understanding and analyzing the policies that will go into the plan."

Meanwhile, a group called Residocracy is circulating a petition for the Land Use Voter Empowerment (LUVE) initiative, that would require residents to vote on developments greater than three stories. Also on the ballot will be 4 City Council members, including Terry O'Day and Gleam Davis, who pretty much have voted for every major development that has come before the Council during their 4 year tenure.

Says the Santa Monica Coalition for a Livable City (SMCLC): "SMCLC strongly opposes the latest draft of the proposed Downtown Plan which would open the floodgates to massive development while sharply reducing community input. It is a recipe for a dense, congested, overbuilt downtown with ever worsening gridlock and parking. It is exactly what residents have said they didn't want."

Almost two years ago, in response to SMCLC's call to action, some 350 residents attended the City's Downtown Plan forum, where resident after resident told city officials to stop the hyper-development planned for our downtown.

The message was clear: Residents overwhelmingly rejected the insider planning process and city staff's "vision" of development sites not tethered to zoning.

The City then funded a scientific poll of residents as to heights and densities in the downtown and got the same answer - by over a 2 to 1 majority, residents -- young and old -- overwhelmingly rejected taller, denser buildings and the "anything goes" sites, euphemistically labeled "opportunity sites."

The City has now released and renamed its 20-year Plan as a "Community" Plan. It would radically transform the downtown with heights up to 130 feet for mega projects on large parcels.

And what about community input? The Plan would sharply reduce it by allowing projects of up to 100,000 square feet to be built almost as a matter of right, without even going to City Council as long as a checklist of so-called "community benefits" is included.

So far our Planning Commission seems largely to have gone along with the Plan but it will return to them for final review and recommendations in May.

This Plan is unacceptable and it breaks faith with residents. We will alert you in May as to the steps we can take together to fix it and control the hyper-development now proposed for our downtown.