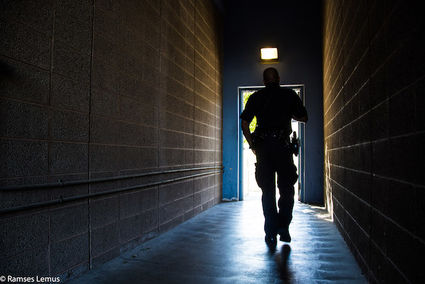 A photo story on a day in the life of a college police officer by SMC student and Corsair photographer Ramses Lemus won a first-place award in a California competition sponsored by the Journalism Association of Community Colleges.

Corsair Editor-in-Chief Nik Lucaj and Corsair News Editor Adam Thomas are finalists in the Regional 11 Mark of Excellence awards sponsored by the Society of Professional Journalists in the multimedia storytelling category. Final results will be announced at the Region 11 spring conference at the Heard Museum in Phoenix, AZ on April 30.

The Corsair also won 11 awards in a California competition sponsored by the Journalism Association of Community Colleges (JACC).

The Corsair awards were part of JACC's publications contest, which represent the best of student journalism from California's community colleges published during the last academic year. The awards were announced at the organization's state convention held from March 17-20 in Burbank, CA.

A complete list of SMC awards at the 2016 JACC State Conference follows:

The Corsair staff produces a weekly newspaper in the spring and fall semesters and also maintains an online news site, http://www.thecorsaironline.com.