Das Kapital by Karl Marx: The Process of Capitalistic Production

How all Humans Socially Labor 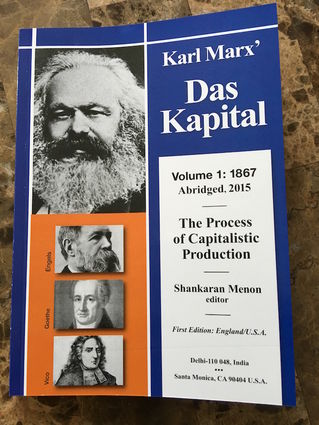 The Process of Capitalistic Production

Some twenty years agone I had read this remarkable book by Karl Marx, merely Volume one of the author's four volumes created over two decades of work in exile, though he made a home of England. They were intended for three printed books. It ended up as six printed books !

Marx himself published only the first book, then had a mild stroke, and was unable to finish the rest. But such an outpouring of heart, intellect, wit, and analysis made Volume one a world classic some years on, though not in his lifetime. He was famed for his earlier work in politics, but this book is pure economics, sociology and social history.

It was easy reading given the subject matter. It was easy because the English sentences were simple. Sometimes when inverted a new understanding would emerge. Yet most people find the matter too dry, too detailed over the 800 pages. They either don't read it, or stop very soon.

Yet, for the first time in history he was able to show a) how all humans socially labor as a UNIFIED ONE, and b) how surplus value of labor extracted daily from a worker makes a few rich, a vast number poor. This happens like a law within the capitalistic production of Commodities in the modern world we know, post the industrial revolution that evolved strongly in the 1700's.

The process had begun as early as the 1350's in England. This mode of human existence furthermore LOCKS him into a condition where he becomes a part of the process of the accumulation of wealth, and cannot escape it. He becomes much like the raw materials used in the production process. Note, most labor think they lead independent lives, helping loved ones and family to get ahead, despite the observation a) above. Furthermore accumulation of wealth requires a continously expanding population.

Thus came the idea, so many years later in 2015 that if this book could be made finger thin, then as a sort of Cliff Notes people could read the wealth of insights and wisdom therein in an easy manner. Economics rules the average person's life. So much seen daily in the television and newspaper headlines are easily explained after reading this book, not to mention one's own life conditions and much other social conditions. 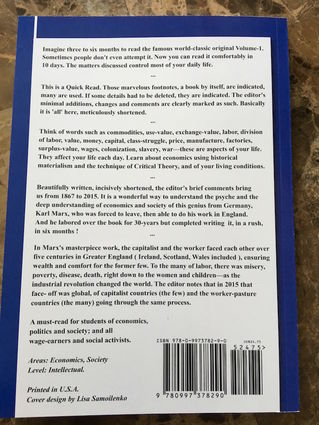 The abridging process was done meticulously. The footnotes alone in some five languages, from the Egyptian to current times in 1867 form a book by themselves. They are mentioned or used. If a deletion was done, it is mentioned. Small remarks by the editor to give opinion or bring some currency to 2015 are indicated by a separate syntax. We have seen other abridgments that drop entire chapters, or initiate discussion in pure skepticism of Marx's genius or simply requote portions of the original text. In this work the reader will benefit from getting all of the orginal in a very compact form, readable in ten days rather than over six months, if at all.