Griffin Is Back But How Effective Will He Be?

"Don't take away from the others who've been doing so well" 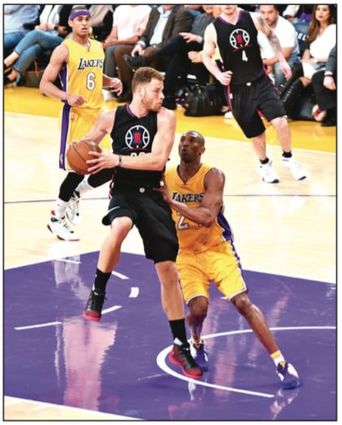 I went to Staples Center Sunday to see a basketball game. Instead, I saw a workout.

Blake Griffin was returning to the Clippers after missing 45 games due to a broken hand, a torn quadriceps and a four-game suspension.

He was in the starting lineup but as the game progressed I realized he wasn't going to be featured in the Clippers' offense. He was beginning to get back in shape by running up and down the court, making careful passes and only occasionally taking a shot.

He took only seven shots and scored just six points, which is 16 below his average..

I'm not complaining. Coach Doc Rivers did this right Don't get away from what's been working when Griffin wasn't playing. Don't go all the way back to Griffin, with help from Chris Paul dominating the offense. Don't take away from the others who've been doing so well.

After all, the Clippers were 30-15 in Griffin's absence.

It was more of the same Tuesday night. The Clippers took a 20-2 lead and cruised to a 103-81 victory over the Lakers as Griffin wasn't required to do much.

He played only 17 minutes and had four points and three rebounds.

The Clippers now have only five regular season games left before the playoffs begin.

It's doubtful the Clippers can go far in the playoffs if Griffin isn't a key play- er in their plans. Especially since it looks likely the Clippers would play the defending champion Golden State Warriors in the second round.

"My conditioning is a little bet- ter than I expected but not great," Grif-

The Clippers have a lot of good players and can succeed in the regular season without Grif n help- ing much. But the playoffs are a different matter. The league's worst teams hadn't qualified. It's a seven game series in every round against quality opponents.

So let's watch the Clippers closely as they approach this dif cult stretch. They lost in the second playoff round last season. And that was merely against Houston.

Golden State, of course, would be a more difficult challenge.

And it's also possible that Memphis or Portland would put up major resistance in the first round.