Alice as Captain of Her Father's Ship, The Wonder

Alice Through The Looking Glass

ALICE THROUGH THE LOOKING GLASS is an extraordinary visual wonder from beginning to end, exhilarating the senses with eye-dropping kaleidoscopic imagery and a sweet sensitivity between Alice and the Hatter that touches the heart and the tear ducts. The magnificence and magic of ALICE comes not only from a cleverly written script by Linda Woolverton, but from the meticulous attention to detail by director James Bobin on both the technical and creative levels, melding the "Carrollian" world and the "Burtonian" world to create this exquisite "Bobinian" world.

If you're looking for Johnny Depp to run amok as the Hatter in this sequel to Tim Burton's 2010 "Alice in Wonderland", think again, because this time around, while it is Hatter's condition around which the story revolves and evolves, ALICE THROUGH THE LOOKING GLASS is truly about Alice with Alice driving the action while opening the way for heart to loom larger than the Red Queen's big heart-shaped head.

Our story opens with Alice now captain of her father's ship, The Wonder. Under fire by pirates, we see Alice navigate turbulent tides, stormy seas and menacing rocks because after all, nothing is "unpossible." Fast forward some years later and Alice is safely back home. But just what has she come home to. Her one-time wimp of a fiancé Hamish has taken control of the shipping company and her mother has put up the family home as collateral for funds to survive all these years Alice was at sea. The only way to save their home is to give up The Wonder, Alice's last link to her father.

Wandering alone through Hamish's manse trying to escape not only a party at which she doesn't want to be, but the reality of what life has become, Alice runs into an old friend - Absolem from Underland who leads her "through the looking glass" back into Underland. Once back in the comfort and beauty of Underland amidst her friends, White Rabbit, the White Queen, the Tweedles and Cheshire Cat, it's obvious her dearest friend of all is missing. Hatter.

Hatter is not well. Suffering with extreme depression, he has taken to bed, his condition worsening day by day. All hope that seeing Alice will be the cure for what ails him, but as she discovers, Hatter is suffering from losses and guilt of his childhood. To Alice, the solution appears simple; go back in time and change the past. But there's only one way to do that - meeting Time himself and absconding with the Chronosphere, a device that lets you time travel.

Returning for ALICE THROUGH THE LOOKING GLASS in their beloved roles of Alice, Hatter, Red Queen and White Queen, respectively, are Mia Wasikowska, Johnny Depp, Helena Bonham Carter and Anne Hathaway while Matt Lucas, Stephen Fry, Michael Sheen, Timothy Spall and Alan Rickman, among others, reprise their work as the Tweedles, Cheshire Cat, McTwisp, Bayard and Absolem, respectively. A sad note comes with ALICE THROUGH THE LOOKING GLASS, though, as this is Alan Rickman's final performance. Although he passed away during filming, he did complete all of his ADR work prior, thus giving us an even more poignant note on a film that talks about time, its passage and cherishing loved ones.

Written by Linda Woolverton and directed by James Bobin, fresh off "The Muppets Most Wanted" and venturing into his first CGI-animated film, the initial idea for ALICE THROUGH THE LOOKING GLASS stems from Alice creator, Lewis Carroll, who wrote one line in the original "Alice in Wonderland" book where Time was introduced through dialogue by Hatter as he related he had quarreled with Time who then stuck Hatter in a never ending moment of time at a tea party. From there, Woolverton and Bobin embark on their own new adventure, new story and new characters, developing story and visuals that embrace the complexities of Time and time itself, both literally and figuratively, while artfully addressing thematic elements of mortality and morality. Disappointingly, however, many of our Lewis Carroll favorites now play second fiddle to Alice and Time.

Once again, Disney leads the charge with a strong female protagonist who uses her brains and her heart as Alice is strong-willed, determined, the captain of her destiny and a loyal friend. The emotional strength and conviction of Alice through the feminist lens of Bobin and Woolverton is celebratory. More toned and tempered this go round is Hatter which makes way for the introduction of Time himself, the half man-half clock. The philosophical themes introduced through Time are rich and engaging. And while back stories for the White Queen and Red Queen, and Hatter and his family, play into the concept of time, so does Alice's own "real life" dilemma. As we see time and again, time waits for no man, or woman, especially in Underland.

Bobin and Woolverton more than meet the challenges of staying not only true to Lewis Carroll while creating new adventures and concepts that go beyond the original "Alice" stories", but Bobin also embraces the palette and tonal thematics established by Tim Burton in the first "Alice" movie while individualizing it with his own stamp. For example, the lightness and delicacy of the tea party and cherry blossoms is so much softer than a Burton film, and truly speaks to Bobin's sensibilities.

The opening ocean voyage is magnificent, giving a nod to "Pirates of the Caribbean" in its design as well as crisp visual style and pace. Connective tissue with the tides of time word play that again finds Alice asea and at the helm is a delight. Adding to the visual marvels are Alice's actual travels through the glass. Simply dazzling. And the Chronosphere is a work of art. I expect some VFX Oscar nods for VFX Supervisor Ken Ralston and his team next January.

Dan Hennah's production design is mind-boggling. Beauty and attention to detail at every turn. The tea party layout is meticulous, complete with delicate and pretty parfait pastel tones. Florals are exquisite, particularly with contrasting purple jewel tones against the pastels. Villages, castles and the living/deceased Underlandian worlds are not only detailed in design, but cinematographer Stuart Dryburgh and his use of light is perfectly designed and utilized as an emotional tool. Adding to the beauteous grandeur in Underland is Time's kingdom, broken into the living and the non-living. While the living world of Time is ethereal with that precious golden glow that is repeated throughout with clock faces, sun, Time's "heart" and mirror the yellow-haired girl, the unliving has an inky midnight blue with flat lifeless tone that is as equally emotionally striking.

And speaking of Oscar nods, look no further than Colleen Atwood and her costuming. Picking up an Oscar for her work in "Alice in Wonderland", Atwood has outdone herself in ALICE THROUGH THE LOOKING GLASS. Eye-popping delights! Particularly stunning is the "party" outfit we see on Alice - a Chinese inspired outfit with neck overlay embellished on each tip with little pagodas. Gorgeous is an understatement. But making the costume even more impressive is how it "deconstructs" through Alice's chronospheric travels. Notable is that but for a simply white nightgown, all of Alice's costumes, from captain's rig to party clothes are pants which are designed either as tight-fitting pants or a palazzo pleated look. Time's costume is commanding with a regalness that harkens to Henry the 8th with overdone shoulders and ermine drape. A timeless look indeed. And of course, you'll be simply mad for Hatter's coat.

Danny Elfman soars with a majestic score that embodies the tides of time. 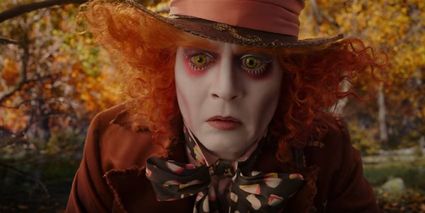 And stay for the end credits. A timeless homage to Lewis Carroll with pan and ink illustrations.